HRW: election campaign in Azerbaijan is notable for restricted dissent and attacks on opposition 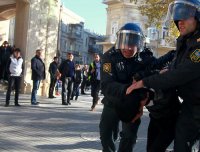 The Azerbaijani authorities deliberately pursue the policy of limiting dissent on the eve of the presidential election. This was stated in the report "Period of Crackdown in Azerbaijan: Attacks on Civil Society and Opposition" disseminated by the international organization "Human Rights Watch" (HRW).

The report of the HRW, released on September 2, claims sharp deterioration in the situation of freedom of expression, assembly and association during the recent 1.5 years. The study of the human rights organization is based on more than 100 interviews and documented stories of 39 persons who were detained, arrested and sentenced on fabricated charges or were subjected to other forms of harassment during the period of February 2012-August 2013.

"No free and fair election can be held without lively debates in the media and free participation of citizens in peaceful demonstrations," states Georgy Gogiya, Senior Researcher of the HRW for Southern Caucasus.

The government should secure the release of all persons detained on groundless politically motivated charges. This was emphasized by the HRW report.