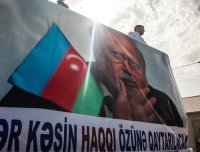 Today, the Supreme Court (SC) of Azerbaijan has dismissed the appeal lodged by the screenwriter Rustam Ibragimbekov, the chairman of the oppositional National Council of Democratic Forces (NCDF) of Azerbaijan, against his non-admission to the presidential election. Thus, after the decision of the top judicial instance, he has finally lost his chance to run for the presidency at the October 9 election.

In the opinion of the lawyer Agaev, prior to making a decision to dismiss the motion, the SC has failed to comprehensively investigate Ibragimbekov's complaint.

"The consideration was brief and formal. The SC has in fact acted as a notary by just upholding the verdict of the Baku Court of Appeal (CoA) and the decision of the Central Election Commission (CEC)," Fuad Agaev told the "Caucasian Knot" correspondent.

According to his story, Rustam Ibragimbekov will most probably appeal to the European Court of Human Rights (ECtHR) about his violated rights to free elections and a fair trial.

"Along with that, we will send a complaint to the UN Committee on Human Rights in connection with a violation by the Government of Azerbaijan of Rustam Ibragimbekov's election rights and the elimination of one of the most viable competitors of the regime candidate Ilham Aliev out of the electoral process," said the lawyer.