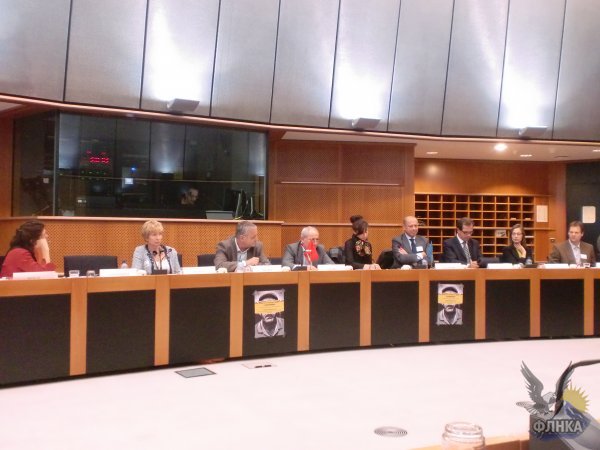 Following a fact-finding mission to Dagestan and Azerbaijan to assess human rights violations committed against the Lezghin people and other ethnic minorities in the region, the Unrepresented Nations and Peoples Organization (UNPO), in coordination with the office of Mr. François Alfonsi, MEP and Chair of the Intergroup on Traditional Minorities, National Communities and Languages, and the Federal Lezghin National Cultural Autonomy (FLNCA), presented a comprehensive report highlighting the troubling state of democracy and minority rights in Azerbaijan. The event was held in the European Parliament and had a strong turnout consisting of politicians, academics and journalists.

The five-day fact-finding mission, which took place from 27 August-1 September, commenced in the Republic of Dagestan (Russian Federation), bringing the participants on a route through Makhachkala, Derbent, Kasumkent and a number of small Lezghin-inhabited villages before crossing the border to Azerbaijan, where further Lezghin settlements were visited in the area of Qusar, to finally conclude in Baku. The presented report was subsequently composed, breaking the findings and recommendations into three categories: political representation, socio-economic conditions, and culture and language.

The participants of the fact-finding mission hail from a wide range of disciplines: a MEP, Mr. Csaba Sógor; a journalist from MO* Magazine, Ms. Julie Reniers; two members of the Flemish parliament, Ms. Fientje Moerman and Mr. Matthias Diependaele; a photojournalist, Mr. Pietro Bruni; and an academic from the ULB specializing in the northern Caucasus, Dr. Aude Merlin. At the report presentation, many provided testimonials regarding the democratic, economic and cultural rights deficiencies facing the Lezghin people.

Ms. Moerman stated that although “we, as a European continent, have economic interests [in Azerbaijan], we should not let that lead us to turning a blind eye towards values that we deem essential in our own community”.

The aim of the fact-finding mission and the subsequent report presentation is to draw international attention to the concerning situation for democracy and minority rights in oil-rich Azerbaijan, which is preparing to hold its presidential elections on 9 October. According to interviewees in Azerbaijan, these elections will lead to a “foregone conclusion with victory falling to the ruling party on the basis of vote tampering and irregularities in the vote count”. UNPO will convene a conference in the European Parliament on 3 October 2013 entitled: “Azerbaijan’s Presidential Elections: What Future for the Land of Fire?”