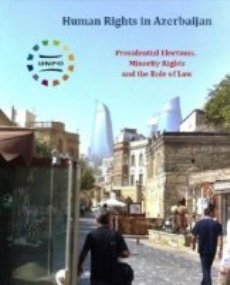 With the publication of the report the Unrepresented Nations and Peoples Organization (UNPO) wants to raise awareness about the critical human and minority rights situation in the Republic of Azerbaijan, in light of the recently held October 2013 presidential elections.
With the European Union maintaining close links with Azerbaijan through a variety of avenues including the Eastern Partnership, the EU-Azerbaijan Partnership and Cooperation Agreement, the European Neighbourhood Policy, various EU assistance programmes and the Euronest Parliamentary Assembly, it is clear that Azerbaijan is of growing interest and importance to EU policy-makers. In addition to this, the October 2013 presidential elections in Azerbaijan have attracted much international attention.

As well as the crackdown on civil society and the persecution and arrests of human rights activists and journalists, these elections revealed a clear divide between the representatives of the European Union observers.

We are disconcerted by two conflicting reports; the OSCE PA and EP delegations praised the elections in Azerbaijan to be "free, fair and transparent”, whereas the ODIHR delegation considered the elections to be "seriously flawed”, with 58% of the polling stations assessed as bad or very bad.

With this is mind, we would like to present our recently completed analytical report, "Human rights in Azerbaijan: Presidential Elections, Minority Rights and the Rule of Law” in which the controversial assessments of short-term and long-term observers are scrutinized. The report additionally sheds light on the crackdown of the Azerbaijani government on human rights activists, journalists and minority representatives.

It is crucial to mention that the persecutions and arrests of the representatives of ethnic minorities, (which intensified in light of the October 2013 elections), are of paramount seriousness for our organization. In particular, UNPO is deeply concerned about the recent arrest of the Talysh human rights defender Hilal Mammadov. In addition, UNPO expresses its deepest concern about the arrest of Anar Mammadli, co-founder of Election Monitoring and Democracy Studies Center (EMDSC) in Azerbaijan, on bogus charges of tax evasion. Our organization strongly condemns repressive measures of the Azerbaijani government and calls upon the international community to devote more attention to severe human rights violations in the country.