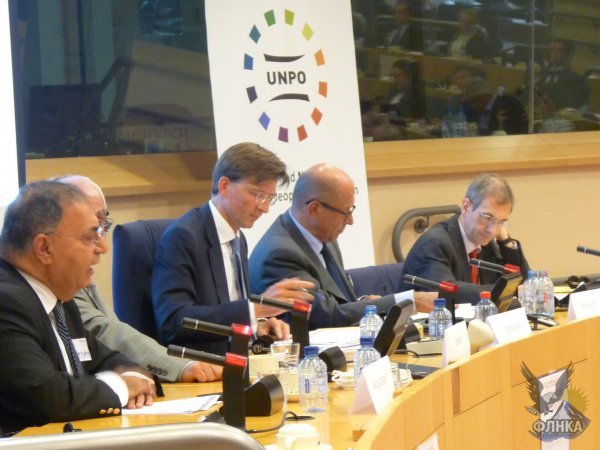 On 3 October 2013, in view of the forthcoming presidential elections in Azerbaijan, Gerben-Jan Gerbrandy MEP organised a seminar in association with the Unrepresented Nations and Peoples Organization (UNPO) entitled ‘Azerbaijan’s Presidential Elections: What Future for the Land of Fire?’ The seminar took place in the European Parliament and consisted of two panels, moderated by Mr. Gerbrandy and Mr. Marino Busdachin, General Secretary of UNPO, respectively.

The first panel, focussing on the current political situation in the run-up to the 9 October elections, started off with a presentation by independent elections expert Ms. Caecilia van Peski. Van Peski, who was deployed as an international election observer by the OSCE in Azerbaijan’s previous elections, provided an illuminating analysis of the political situation in the larger region of South Caucasus. She also gave an overview of previous elections in Azerbaijan, stressing that elections under President Aliyev have not met international standards in the past. The second speaker to take the floor was Mr. Isa Gambar, leader of the opposition party Musavat, speaking as a representative of Mr. Jamil Hasanli. Gambar drew attention to the several obstacles facing opposition politicians, including a shortened campaign period, limited broadcasting opportunities, and a constitutional amendment in favour of the incumbent president. The final contribution to the first panel was delivered by Mr. David Nichols, Senior Executive Officer on EU Foreign Policy at Amnesty International’s European Institutions Office. Nichols spoke of the poor human rights records of the Azerbaijani government, highlighting the increased level of harassment of human rights defenders and activists in light of the approaching elections.

The second panel, dedicated to the future prospects for Azerbaijan, started with a presentation by Mr. Asim Molla-zada, Member of the Azerbaijani Parliament and President of the Democratic Reforms Party. Molla-zada pointed out that human rights abuses are an issue in all post-Soviet states, and summoned the EU to give younger generations of Azerbaijanis a chance to learn from European education and culture. Dr. Pierre Dybman, Political Officer in the Eastern Partnership Bilateral Division of the European External Action Service followed, presenting an informative timeline of EU-Azerbaijan relations, and expressing hopes that Azerbaijan will keep to its commitments as envisioned in the agreements concluded between the country and the EU. The last speech of the seminar was delivered by Dr. Enver Kisriev from the Russian Academy of Science. Kisriev raised the problems facing the Lezghin and other minorities in Azerbaijan, in terms of cultural and linguistic expression as well as civil liberties – of particular importance in election periods.

The strong turnout of the seminar, as well as the many and emotional reactions from the floor confirmed the relevance of the topics discussed, as well as the crucial timing of the event. Questions of national identity and minority rights in Azerbaijan proved to be particularly sensitive issues. The event was attended by Members of the European Parliament, European officials, journalists and civil society activists.