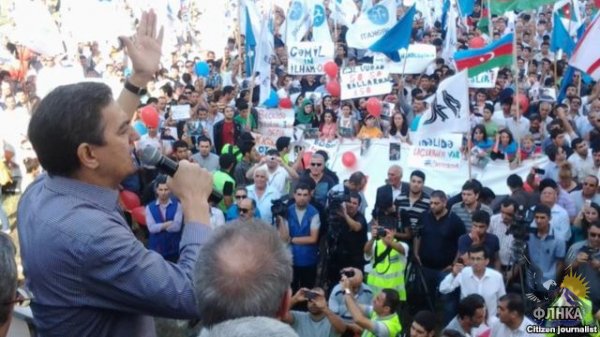 Azerbaijan's main opposition coalition has held a rally in Baku to boost support ahead of the country's October presidential election.

Correspondents say some 2,000 supporters of the National Council of Democratic Forces gathered September 22 at a stadium in the Yasamal district of the capital.

Ali Kerimli, chairman of Azerbaijan Popular Front Party, called the October 9 vote a "battle for our homeland, for our future, for our children, and for the entire nation."

Hasan Karimov, the deputy head of Popular Front, said police prevented some supporters from attending the rally, blocking entryways and limiting access to the stadium.

The rally concluded with participants putting a number of demands on the government, including the release of political prisoners, and creating normal conditions for presidential candidates to meet with potential voters.

Demonstrators also called for the publication of a complete voters' list, and said incumbent President Ilham Aliyev must stop using government resources to promote his own election goals.

Some eight candidates are expected to face off against Aliyev, who has held power since succeeding his father in 2003, and is widely expected to win a third term.

Hasanli is running instead of the council's first choice, Oscar-winning screenwriter Rustam Ibragimbekov, who was disqualified last month by the electoral commission because he has dual Russian-Azerbaijani citizenship.

Speaking at today's rally, Hasanli called on supporters to help put Azerbaijan on a democratic path.

"Nobody can turn our country into North Korea!" he said. "Nobody can insult our democracy by 'planting' monuments! Nobody can erase our history of democracy!"