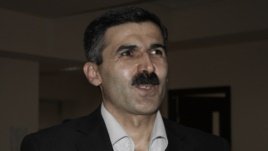 BAKU -- The son of an Azerbaijani opposition figure has been stabbed and beaten by unknown assailants.

Ali Gulaliyev, the son of Oqtay Gulaliyev, the spokesman for opposition presidential candidate Camil Hasanli, is recovering in a Baku hospital from the attack on September 23.

An Interior Ministry spokesman confirmed the reports late on September 24, but denied that the attack had any political motive.

Also on September 23, the son of the leader of the opposition Azerbaijani Popular Front Party (AXCP), Ali Kerimli, was sentenced to 25 days in jail.

Hasanli is the unified opposition contender for the presidency and is seen as the only viable alternative candidate running in the October 9 presidential election against incumbent President Ilham Aliyev, who has held power since succeeding his father in 2003.