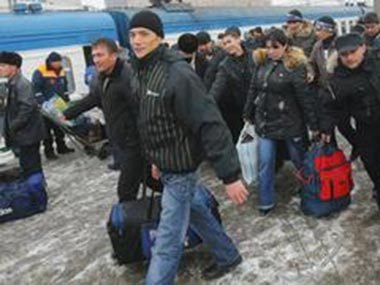 The State Migration Service (SMS) of Azerbaijan hides information about the situation in migration sphere. The information that is published on the official website of the organization, says nothing, told Aliovsat Aliyev, the director of the Migration Center of Azerbaijan, to the Azerbaijani information agency "Vesti.Az".
The expert also noted that migration Code and other applicable laws and regulations for controlling the migration processes in Azerbaijan do not contain any rules for keeping information in secret. "It's just the personal initiative of the SMS leadership," he noted.

As noted by Aliovsat Aliyev the things that are happening in Azerbaijan in migration sphere, occur in all countries. "People move from one country to another, turning for citizenship, reject it, ask for a refugee status, someone gets permission to work, some do not.
There are people who have no citizenship, their number is rising or falling. People turn to us for asylum, why do they do it? From what countries and why do the people are flee? This information should be a public property. We are concerned with the fact that the SMS does not comply with transparency principle," says the human rights activist.

According to Aliovsat Aliyev, it brings to a thought that SMS has its own considerations, if it withholds information, but what are they based on, we do not know.

"We say that, for example, in Azerbaijan, there are more than 150,000 foreigners illegally residing in the country. Why the SMS is silent on this? Why is it silent about the refugees? Or maybe it is ashamed of the fact that Armenia took in 5,000 refugees from Syria this year, while in Azerbaijan, only 55 persons were granted refugee status over the period mentioned? May be they are shamed that of the fact that no refugee was able to get citizenship? Or maybe they are ashamed of the fact that persons granted refugee status, had fled to a third country? " the human rights activist wonders.

As the "Vesti.Az" notes, this week the list of government members of Azerbaijan was approved. SMS head Firudin Nabiev joined the new government. Hopefully, Nabiev will revise the activities of the service, which turned into a closed unit since its first days.

In his turn, the head of the Eurasian platform of civil initiatives Azer Allahveranov stated that SMS has sufficient information on migration, which, however is not publicly available. "I am sure an analytical work with the information is being carried out. But for the effective implementation of the migration policy it is very important that the information database, which is created by the SMS, involved all the elements which are not only quantitative indicators of entry, exit, visa support or other procedures. There is definitely no analysis," said Allahveranov says.

He recalled that, as a rule, the head of the SMS delivers a report at the country's parliament on the results of the current year. These reports should be available on the site of the organization. But they do not go beyond the Azerbaijani Parliament. "It often happens that we do not refer to sources within the country, but turn to the data of the international organizations which do not always coincide with each other. For example, the OSCE has its own data of migration, while SMS has its own. This leads to incorrect assessments of the situation and it turns out that the work is not effective," he said.

Due to the gross migration from Azerbaijan to Russia the number of Azerbaijanis in Russia almost doubled in the period between the censuses of 1989 and 2010 carried out in RF. At the same time, the experts believe that the official census does not reflect the real picture, and the total number of Azerbaijanis in Russia makes approximately 2.5 million people. Accordingly, the amount of the population of Azerbaijan, the official statistics of which practically ignores the fact of migration, is less by minimum of 2.5 million people.

On July 5, in 2012 the head of the Azerbaijani State Committee for Diaspora affairs Nazim Ibrahimov stated that there are 2.5 million Azerbaijanis living in Russia. Accordingly, Azerbaijan's population is lower with at least 2.5 million people – the official statistics which virtually ignores the migration. According to the State Statistics Committee of the Russian Federation, Russia accounted 22,306 Azerbaijani citizens in 2011, and 1,244 people moved from Russia to Azerbaijan. The negative migration balance in Azerbaijan amounted to 21,062 people.

At the same time there is a major migration of Azerbaijan to Ukraine, Kazakhstan, the EU and the U.S. And when you consider the fact that the official data do not always reflect even the small part of the real picture, you assume that actually not 40,000 but 120,000 people emigrate from Azerbaijan annually.