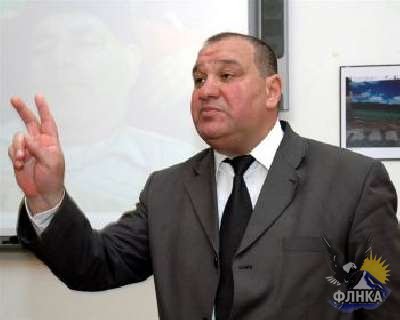 The head of the NGO " Enhancing the protection of democracy," the former "prisoner of conscience" Vidadi Iskenderli was arrested in Geychay today. He was arrested Nov. 30 at a local park and on the same day Geychay district court sentenced him to 15 days in jail, finding him guilty under article 310.1 (resistance to police) of the Code of Administrative Offences.
According to police, V.Iskenderov, "not being sober, roughly spoke against the state and individual officials and violated the public order."

However, according to the human rights activist's brother, Vice-President of the NGO " Enhancing the protection of democracy," Oktay Iskenderli, V. Iskenderli was arrested on trumped-up charges.

According to O. Iskenderli, the human rights activist arrived in Geychay November 30 in the afternoon and the locals warmly welcomed him in the city park.

They began to talk about their problems and complained about the chief executive of Goychay Mansur Mammadov, a close relative of the Minister of Transport Ziya Mammadov, continued O.Iskenderli .

This was reported to the district leadership and soon a large force of police was sent to the park. The human rights activist was detained and taken to the district police. Thus, under pressure from the police, doctors gave their opinion about the discovery of "small amount of alcohol" in the activist's blood even though he suffers from diabetes.

V. Iskenderli was sentenced to 15 days based on the testimony of these same policemen. However, he was not provided with a lawyer. The court also did not let in many local residents, who came to support V. Iskenderli.

In the statement, the NGO "Enhancing the protection of democracy" says that in order to avoid repetition of Guba and Ismaiily events the Geychay authorities should take serious measures. "The President will be informed about the iniquities of the chief executive of the district Mansur Mammadov," the statement said.

V. Iskenderli has repeatedly been brought to administrative and criminal liability.

For participation in opposition rallies 2 and April 17, 2011 , he was first put under administrative arrest for 5 and 15 days. May 2, 2011 he was arrested on a criminal charge of interference in the election process in the parliamentary elections in 2010 and subsequently sentenced to three years' imprisonment.

Although the same V. Iskenderli, being a candidate, revealed facts of falsifications and presented video evidence of this. V. Iskenderli has been recognized by Amnesty International "a prisoner of conscience" and December 26, 2012 he was released early by amnesty.