Azerbaijanis loose optimism, but not hope 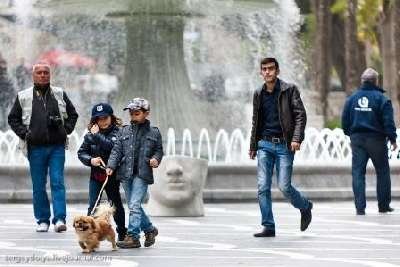 Azerbaijan ranks 12th with 16% in the ranking of economic hope among the 65 countries included the rating list. It means strengthening pessimism among the population - in the beginning of 2013 the country was much more optimistic, and ranked 2nd with 56 % .

The Azerbaijanis are subject to fluctuations in the mood for the future. For example , in 2011, optimism was enough only for 2% , and in 2012 was a jump to 30%. Government is something to ponder , despite the fact that the situation could be worse, and the country could loose. The situation in the neighboring South Caucasus countries is different. In Georgia there is high level of optimism. This country ranked second, and was behind Fiji. Armenia came out of the negative zone , and adding optimism by 7% rose to 17th place.

The rating was based on the poll of residents about what expect form the coming year. The survey was conducted by WIN-Gallup International Association in early 2014 in a worldwide study Global Barometer on Hope and Despair, during which 70,000 people from 65 countries were polled on a nationally representative sample. Survey participants were asked about the economic outlook and forecasts they have in the new year.

The results show, that worldwide economic optimism is reduced; Russia and the United States generally immersed in the economic gloom. Global index of economic expectations on the come in 2014 is 2% , which is 5 % lower than in 2013. As in previous years, the most optimistic countries is in the Asian and Middle Eastern regions, while developed countries are in the gloom.

As for the overall picture in the world , it is heterogeneous. Looking at the trend in recent years , it can be noted that the economic pessimism is slowly leaving Western Europe. At the same time hopes for economic prosperity, which in previous years so violently demonstrated developing countries, are weakening. Such processes could be described as a return to balance and harmony.