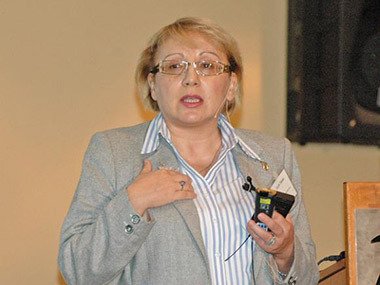 On Monday evening in Baku airport famous Azerbaijani human rights activist, director of the Institute of Peace and Democracy (IPD)Leyla Yunus and her husband conflictologist Arif Yunus were detained. As Azerbaijani news agency Turan reports, Yunus couple was detained when flying to Doha. They intended to fly to Paris from Doha then to Brussels, where by the invitation of the EU they should have participated in an international event.

When going though the border pass they were informed that they are not allowed to leave Azerbaijan. After that the Western diplomats in the face of French ambassador and U.S. deputy ambassador called to the deputy head of the Presidential Administration of Azerbaijan Novruz Mammadov and then Yunus with her husband were allowed to pass. However, later they were again stopped when they were entering the plane.

Yunus told the agency on telephone that four people dressed like civilians came to them with a camera and wanted to question the couple. However, Yunus refused to speak without the presence of a lawyer.

It is noted that the director of the Institute of Peace and Democracy (IPD)Leyla Yunus on Tuesday at 7 a.m. was taken for questioning to the Investigation Department of Grave Crimes of the Prosecutor General’s Office of Azerbaijan. Her husband who had been detained with her was hospitalized in pre-infarction condition.

During the search in the airport, in which Khalid Bagirov was not allowed to be present, the Azerbaijani security forces seized the couple’s notebook and paper records. Arif Yunus called his colleagues and said that they were still in the airport and their belongings were being searched. According to him they were surrounded by the employees of the Ministry of National Security, the Prosecutor General and the Security service of the airport. The couple was taken to their apartment at around 3 a.m. so as their house could be searched as well.

Yunus refused to open the door and let the apartment be searched. She said she would agree only if during the search the civil society activists were present. The human rights activist declared that she didn’t trust law enforcement bodies of Azerbaijan and that they could put something in their apartment. On their turn, the law enforcement bodies were threatening to break the door if they didn’t open it.

Then, the security forces made attempts to persuade the owners of the house to open the door guaranteeing that it was "just a formal procedure”. They were discussing that 5 people from the law enforcement bodies and 5 civil society activists could enter the house during the search. However when at around 4 a.m. Arif Yunus didn’t feel so well and was hospitalized in pre-infarction condition the head of IPD flatly refused to negotiate and said that if they broke the door she would not take part in the search.

At around 7 a.m. Yunus was offered to go for questioning to the Investigation Department for Grave Crimes of Prosecutor General’s office. She went there accompanied by lawyer Khalid Bagirov and IPD lawyer.

What comes to the search conducted in the office of IPD there is no reliable information available. At night the office was condoned off by the police. However judging from the fact that the light was turned on in the office at night, it can be claimed that law enforcement officers entered the office. Meanwhile the employees of IPD were not allowed to go there.

As Turan reports, it is assumed that the detention of Yunus couple in the airport is connected with the arrest of Rauf Mirkadirov who was arrested on charges of espionage for Armenia. Mirkadirov took part in the projects initiated by IPD and its civil society counterparts in Armenia.

In the previous week Arif Yunus had already been hospitalized with a hypertensive crisis. Leyla Yunus suffers from severe form of diabetes.

On its turn Azerbaijani news portal Haqqin.az posted a video in which Yunus was standing in the street surrounded by the police and telling the journalists that all night she was not allowed to go to the toilet and while she managed to do that, the police officers accompanied her. One of the police chiefs said that they had gone with Yunus "to protect her” and not let her "hurt herself”.

Citing its own sources Haqqin.az has in law enforcement agencies, the portal as well reported that Leyla Yunus and Arif Yunus are detained for the case of Rauf Mirakadirov, who is currently under investigation and is accused by the criminal code of "state treason” for collaboration with special services of Armenia. According to Haqqin.az after the search was conducted Leyla Yunus and her husband were detained as suspects. However, later the source of the portal reported that no charges yet were brought against Leyla Yunus and the situation would be determined in the coming hours.

According to Leyla Yunus this all is the order of the Presidential Administration of Azerbaijan, "They want to discover the so called group of Armenian spies and appoint me, Leyla Yunus, the head of this group of spies,”

Note that Rauf Mirkadirov, columnist of Azerbaijani newspaper "Zerkalo", was arrested on April 18 in Ankara on charges of expiration of documents. On April 19 Mirkadirov was deported to Azerbaijan, where he immediately was arrested and put in custody by the MNS on suspicion of treason. On April 21 the court in Baku sanctioned his arrest for three months. Mirkadirov is accused of the cooperation with special services of Armenia, specifically; he is accused of making the transfers of the state secret information, including those about the dislocation of Azerbaijani Armed forces to Armenia during 2008-2009.

In regard to the charges brought against Mirkadirov on April 22 Yunus issued a statement saying that she had no doubts that the arrest of Rauf Mirkadirov and accusations of espionage for Armenia were aimed to arrest the group of civil society activists as networks of Armenian spies. Yunus has noted that her arrest is predictable as her human rights activities obviously irritate Azerbaijani authorities.

According to Yunus, "by revealing the spy network,” Aliyev regime solves several problems at once. It puts an end to the Armenian-Azerbaijani joint projects with the participation of independent NGOs. After this only state-controlled NGOs would "cooperate” with Armenian colleagues. Another group of obstinate defenders are being punished and the possibility of a broad study of illegal actions of political repressions conducted by the authorities is prevented. In addition, the fear already existent in society, is intensified, Yunus said in her statement.