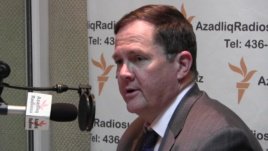 Asenior U.S. official says civil liberties in Azerbaijan have steadily worsened over the past five years and continue to deteriorate.

"But it was still possible for NGOs and independent activists to operate. Sadly, the environment has worsened significantly since then,” said Melia, who is responsible for Europe – including Russia – in the State Department’s Bureau of Democracy, Human Rights and Labor.

Thomas Melia: United States is in ‘‘stern conversations’’ with Azerbaijani authorities in connection with repression in country