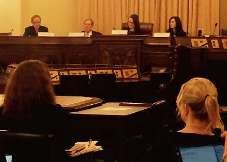 The US Congressional Commission on Security and Cooperation in Europe, known as the Helsinki Commission, on Thursday held a briefing with three prominent analysts and activists to examine the state of human rights violations in Azerbaijan.

Entitled "The Rule of Law and Civil Society in Azerbaijan” the briefing covered such topics as crackdown against independent voices, election, freedoms and the overall functioning of the legislative and judicial branches.

The briefing panel included Ambassador Richard Morningstar, former US envoy to Baku from July 2012 to August 2014, who currently serves as a founding director of the Global Energy Center at Atlantic Council, a Washington-based think-tank.

Morningstar, who is often described as the most informedman in Washington on Azerbaijani elite and its inner circle, raised eyebrows by posing serious questions over ongoing crackdown against rights defenders and civil society in the oil-rich country.

‘I just don't understand what the Azerbaijani government is getting from all these [crackdown]’ he said yesterday during his first public speech on the topic since he left Baku last summer just days after the local authorities arrested LeylaYunus, leading human rights defender. ‘Why is Yunus in jail? What does the Azerbaijani government gain from this [arrest], rather than difficult relations with the West?’

Prior his return to Washington last summer Morningstar termed democracy and human rights issues the ‘elephant in the room’ for the relationship between Baku and Washington. In his speech yesterday he called currentsituation ‘disappointing’ for bilateral relations despite the fact that the two countries ‘have many common strategic interests,’ he said.

Two major factors have been driving back Baku-Washington relations, he said: First is related to human rights issues -- ‘especially since October 2013 presidential election,’ and second, ‘lack of progress’ on Nagorno-Karabakh peace resolution. ‘Baku believes that the U.S. should take strong steps on the peace process,’ he said.

For Washington, he added, Azerbaijan is ‘still important’ albeit Baku should recognize the fact that U.S.’ approach on human rights concerns is helpful. ‘Concrete steps are necessary,’ he said urging Azeri government to refrain from further repressions.

Addressing the audience,DinaraYunus, daughter of Leyla and ArifYunus, said her parents are being punished for their humanrights work.

‘I don't want to be up here next time saying my parents have died,’she said adding that she is very fearful for ailing parents: Leyla suffers chronic illness; Arif is in solitary confinement despite two strokes.

In her speech, Natalia Bourjailyof International Center for Not-for-Profit Law said that civil liberties in Azerbaijan have steadily worsened dramatically over the past few years and continue to deteriorate.

She cited politically tinged prosecutions of political activists and the introduction of onerous laws targeting NGOs as examples of a broad crackdown on civil society.

Azerbaijan is the only country in the world where foreign organizations being asked to register three times: first, register their office, second, get a government approval for their operations and third, register every single grant, sub-grant and every single change to the grant, she said.

‘I don't know of any foreign organizations which were able to get registeredin Azerbaijan since 2009,’ she said.