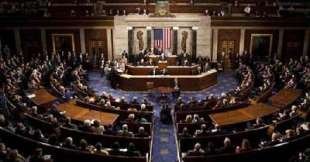 The panel 'Human Rights in Azerbaijan: A Pre-Election Preview' was called by Senators Mark Kirk and Chris Coons, co-chairs of the Caucus, an co-sponsored by several human rights watchdogs, such as Freedom House and Reporters Without Borders.

The move comes as Azerbaijan is preparing to hold parliamentary elections on November 1, in the midst of a systematic crackdown on civil society, while the government, as the organizers put it, 'continues to deny their detainment of political prisoners and restrictions on press freedom.'

"In a one year period, civil society in Azerbaijan has experienced an unprecedented and swift assault - dozens of journalists, human rights defenders, and political and religious activists are behind bars on false charges,' according to the organizers of the briefing. 'Many have been mistreated and are suffering potentially fatal health consequences, including human rights defenders Leyla and Arif Yunus. U.S. civil society and media organizations have been shut down and their employees harassed and arrested, including Radio Free Europe/Radio Liberty investigative reporter Khadija Ismayilova. Reports about harassment and imprisonment of local election monitors in Azerbaijan continue to surface in the media.'

Tomorrow's briefing 'will seek to examine the current political environment in Azerbaijan and address important questions, including: What do the November 1 elections mean for the future of democratic governance in Azerbaijan? What human rights violations are occurring? What does the apparent drift from democratic values mean for Azerbaijan’s strategic partnership with the U.S.? How can policymakers support human rights in Azerbaijan and encourage a reliable partnership that is advantageous for both countries?'

Among the briefers there will be Dinara Yunus, daughter of imprisoned human rights defenders Leyla and Arif Yunus, former U.S. Ambassador to Azerbaijan Richard Kauzlarich, as well as NED's Miriam Lanskoy and Freedom House's Tamara Grigoryeva. David Kramer, former deputy secretary of State and currently with McCain Institute, will moderate the briefing.