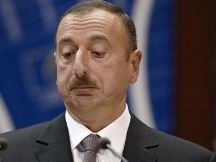 Ilham Aliyev, the President of Azerbaijan, has not been out of country during the incidents that took place on Karabakh – Azerbaijani contact line since July 31 to August 2, writes Azerbaijani (Talish by origin) political scientist Fahraddin Aboszoda in his article titled "The condemned: slaughter in Azerbaijani style.”

The author writes that according to his information Ilham Aliyev has not only been in the country, but, moreover, he has been in Baku all of the time and has been in nervous shock. The political scientist has accused Novruz Mammadov, deputy head of the administration of the President of the Republic of Azerbaijan, of lying. The latter had told everyone that Ilham Aliyev has been out of the country.

Coming to Novruz Mammadov’s statement Fahraddin Aboszoda notes, "During all the time that he has been at office of President’s Administration he has not uttered a single true word. He has lied all the time. He lies and does not blush. We cannot say where Ilham Aliyev was during all that time. We know only that the Minister of Defence was in Bodrum. And even if Ilham Aliyev was in abroad he was to return to Azerbaijan as soon as he learnt about the tragedy of his army.

Not only he didn’t return but he didn’t even try to extend his condolences to the relatives of the killed soldiers. Our sources in Baku assure that Ilam Aliyev has been in Baku all of that time and has been in nervous shock. Modifying the words Yuri Nikulin says in the Soviet famous movie "The Caucasian Captive” we can say in this case that Ilham Aliyev "is not able to come out into his people.”

Second, different representatives of the ruling regime make different and contradicting statements during these days.

Thus, the abovementioned Novruz Mammadov says allegedly the "the statement of the Armenian side saying that "It is Azerbaijan who has initiated the sabotage” does not correspond to reality”, in this way Mammadov shows that he is not aware of the statement of Azerbaijani Minister of Defence, Z. Hasanov.

The author quotes famous journalist Mirza Khazar. He has reminded that the Minister of Defense, in the text of his statement addressed to the president for awarding the soldiers had mentioned that "the latters had been killed while performing their military tasks.” This proofs that "the sabotage has been organized by the Azerbaijani side.”

Concluding the political scientist notes that in this way Azerbaijan will find itself in a ridiculous situation in front of the entire world.

Coming up to the sabotage motives Aboszoda brings the attention on the meeting of the presidents to be held in Sochi.

According to him though the information about the meeting has been disseminated recently, but the high level agreement exists long before. Thus, Ilham Aliyev has made an attempt to leave for Sochi as a winner, which, however, has been failed due to the vigilance of the Armenian forces.

"It is not excluded that Ilham Aliyev has had the wish to appear in the negotiations as a triumphalist, hinting at the idea that if Armenia does not accept our conditions we will solve the problem in a military way. He failed, however. The fact that Ilham Aliyev is silent till now is the proof of the fact that he will have to hold talks in Sochi from the position of a loser. He will not be able to dictate his conditions as the last incidents showed that there is no Azerbaijani army there. Or, better to say, the Army is not able to return Karabakh in a military way.”

Just on the contrary, if Aliyev starts the war he will lose more regions – even Kur and the rest.”