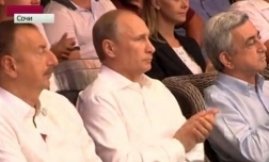 The meeting that the Russian, Azerbaijani and Armenian presidents held today was the 11th in the 21st century. Russian President Vladimir Putin has been taking part in the talks since September 2004, when he attended the meeting held in Astana. Azerbaijani President Ilham Aliyev attended all 11 meetings, his Armenian counterpart Serzh Sargsyan only ten, but all three incumbent presidents met in Sochi for the first time. In 2004 Putin and Aliyev met with Robert Kocharyan, who then served as the head of the Armenian state.

Then there was a gap of four years, as the next trilateral meeting took place only in 2008. In November 2004 the so-called "Moscow marathon" began. Within four years the three presidents met nine times! This period differed greatly from the 90s, when not only trilateral but even bilateral meetings were rare. However the political atmosphere at those times was quite different. The Bishkek peace protocol was signed in May 1994 and bloodshed stopped. It was necessary to stabilize the situation. All parties, including Moscow, had their own position on the way the conflict should be resolved, but no one wanted to put pressure on its partners, risking the fragile peace. President Aliyev decided to focus on developing the Azerbaijani economy, based on production of oil and gas and construction of pipelines to Turkey via the territory of Georgia. In order to pursue its own interests the country had to establish a successful economy. Armenia was facing the same challenge, it also had to draft an economic strategy. The economic situation in Armenia was the most difficult in the South Caucasus. Armenia ignored four UN resolutions calling for the territorial integrity of Azerbaijan issued in 1993. Despite the position of the international community, Karabakh and seven districts of Azerbaijan remain occupied by the Armenian forces. Still, many believed that the OSCE Minsk Group established in March 1992 would be able to resolve the conflict soon.

The "Moscow marathon" took place, when Dmitry Medvedev served as the Russian president. According to politicians and experts, it was the Madrid principles that were discussed during the meeting held within this period. The Madrid principles were suggested to the parties involved in the conflict in 2007. However the text of the document was not published. According to official representatives of Azerbaijan, the document called for Azerbaijan's territorial integrity. The Armenian authorities, however, stressed that the principles drafted in Madrid called for Karabakh's self-determination. Some experts said that the Russian president urged the parties to draft a new document.

Presidents Dmitry Medvedev, Ilham Aliyev and Serzh Sargsyan met for the first time on November 2, 2008. The participants of the trilateral meeting signed a joint declaration. There were no legal formulas in this document. The declaration only specified the main principles of the conflict resolution. "The parties are willing to contribute to the improvement of the situation in the South Caucasus and the formation of an atmosphere of stability and security in the region through a political resolution of the Nagorno-Karabakh conflict based on the principles of international law. The parties have agreed that in order to secure a peaceful resolution of the conflict they should be provided with legal guarantees by the international community," the declarations said. After that the presidents of Armenia and Azerbaijan ordered their foreign ministers to enhance peace efforts backed by the OSCE Minsk Group co-chairs.

On June 4, 2009 another trilateral meeting was held in St. Petersburg in the framework of the international economic forum held in the city. On July 18 the three presidents met in Moscow. Neither summit produced results. In St. Petersburg they even failed to make a joint statement to the press. The Russian president's press secretary tried to stress that the meeting was useful anyway. "The very fact that the meeting took place shows that the parties are ready to maintain dialogue aimed at a peaceful resolution of the Karabakh conflict," the press secretary said. Following the Moscow meeting the three presidents did not even appear together in the presidential horse race. Journalists paid special attention to this fact.

On January 25, 2015 another trilateral meeting was held in Sochi. The meeting was held in the middle of the ratification process of Turkish-Armenian agreement. The process concerned the Karabakh conflict resolution as well. According to Russian Foreign Minister Sergey Lavrov, during the Sochi summit the parties almost agreed the opening passage of the Madrid principles - two years after the document was first drafted. In summer 2010 another St. Petersburg international economic forum was held. Ilham Alieyv and Serzh Sargsyan, who both attended the event, met on June 17. Once again the presidents focused on the Karabakh conflict. Before the meeting journalists were discussing whether any progress in the peace talks is possible at all. The meeting held in St. Petersburg showed that the dialogue is continuing even though no progress has been made so far.

The third trilateral meeting took place the same year, on October 27. The three presidents met in Astrakhan. The most optimistic statement was made by President Dmitry Medvedev right before the talks started. However the meeting itself did not produce any results.

Politicians were much more optimistic after the trilateral meeting held in Sochi on March 5, 2011. The presidents issued a joint statement, according to which they were committed to continue dialogue aimed at a peaceful resolution of the conflict.

The most promising was the meeting held in Kazan on June 24, 2011. It was expected that the president would agree the basic principles of the Madrid document. However it was not done. The parties only declared that they are willing to secure a peaceful resolution of conflict.

The tenth and the last meeting for President Medvedev was held in Sochi on January 23, 2012, on the initiative of the Russian president. Reporters said that the meeting was merely formal. According to them, it was the end of President Medvedev's peacemaking efforts.

The nine trilateral meetings organized by President Dmitry Medvedev produced no results. The parties did not come closer to a resolution of the Karabakh conflict. What caused President Medvedev's peace efforts? There are several possible answers to this question. Some say Moscow was afraid that foreign powers might unfreeze the Karabakh conflict and send a peacekeeping contingent to the region in order to put pressure on Iran. At the time, politicians and experts were seriously discussing the possibility of a US military operation against the country. Others believed that the reason was the Russian-Georgian war and Moscow's desire to secure Abkhazia's and South Ossetia's independence. Others said that Medvedev wanted to look like a peacekmaker for the coming elections. There are also other possible answers. Dmitry Medvedev himself believed that his role in the peace process was positive. "I paid much attention to the issue. I guess no other politician was so active in this field. I believe it was necessary and good work. We managed to approach a resolution of the conflict. I am absolutely certain about that," he told Azerbaijani journalists before leaving the Kremlin.

Intensive talks tend to prevent wars. Whether President Medvedev believed in that or not is unclear. Anyway, during his reign meetings of the three presidents were especially frequent and no military conflict took place. One can say that this alone was a remarkable achievement.
Oleg Kusov

US Does Not Plan Meeting of Armenian and Azerbaijani Presidents

Sargsyan-Aliyev meeting due in Vienna on Nov 19