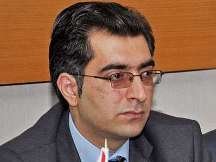 Convicted Azerbaijani human rights activist Anar Mammadov  has become  a winner  of the prestigious international award named  after Vaclav Gavel for 2014. This was announced on Monday during a ceremony at the opening of the autumn session of the PACE.  The prize was awarded to the father of human rights activist Asaf Mammadov. Speaking to MPs, he said that Anar did not have an opportunity to pass a written appeal, therefore through his son he asked to thank for his nomination for this award. Nomination for this award a citizen of former Soviet republic is particularly important during  a period of political repression in Azerbaijan.

This gives us the moral strength and demonstrates solidarity not only with the organization that I represent, but also other  arrested human rights activists and journalists: Leyla Yunus,  Arif Yunus, Intigam Aliyev, Rasul Jafarov, Bashir Suleymanli, Hasan Huseynli, Parviz Hashimli, Hilal Mamedov, etc., Mammadov told the words of his son. They are all "prisoners of conscience".

In conclusion, Mammadov said he was convinced that human rights in Azerbaijan will prevail.

Father of the human rights activist was also invited to the international conference in Prague on October 1 "Human Rights after 25 years."

Besides Anar Mammadov, contenders for the award were also Israeli organization B'tselem, which protects the rights of the Palestinians, as well as a branch of the international organization Jesuit, protecting the rights of refugees. This award is given for the second year for outstanding advocacy.

The Head of the Election Monitoring and Democracy Studies Center Anar Mammadov was arrested on December 17, 2013. Baku Serious Crimes Court sentenced him to five and a half years in prison for illegal business, malpractice and tax evasion.