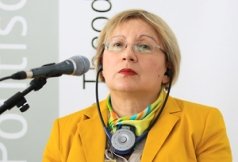 (Berlin) – A hearing on whether to extend the pretrial detention of an outspoken Azerbaijani activist is expected during the week of October 20, 2014, Human Rights Watch said today. Leyla Yunus, who is in ailing health, has been held since July 30 and her husband, Arif, also ailing, since August 5, both on politically motivated charges.
The Azerbaijan authorities should immediately release both the Yunuses and drop the charges against them, Human Rights Watch said. The government should investigate Leyla Yunus’s allegations of ill-treatment in custody and hold those responsible accountable.
"The arbitrary detention of Leyla and Arif Yunus is a travesty and a clear attempt by the Azerbaijan government to silence them with bogus charges,” said Rachel Denber, deputy Europe and Central Asia director at Human Rights Watch. "The government needs to free them immediately and drop the charges.”
Yunus, director of the Institute for Peace and Democracy, was sent to pretrial custody for three months when the couple was arrested on July 30. A court is set to rule on whether to extend her pretrial detention period the week of October 20, but the date of the hearing has not been announced.
The arrests of the Yunuses occurred amid Azerbaijan’s fierce and ongoing crackdown on independent voices, including human rights defenders, independent journalists, bloggers, and political activists.
Yunus, whose organization has focused on combating politically motivated prosecutions, corruption, violence against women, unlawful evictions, and people-to-people dialogue between Azerbaijan and Armenia, is a finalist for the European Parliament's Sakharov Prize for Freedom of Thought. The prize honors "exceptional individuals who combat intolerance, fanaticism, and oppression.” The winner will be announced on October 21.
Leyla Yunus’s health has deteriorated in custody, and her lawyers and relatives have raised concern that she is not receiving appropriate care. Yunus suffers from severe diabetes and kidney problems and requires medication, a special diet, and food at specific intervals. After Arif Yunus, who had been delivering food and medicine packages to his wife, was taken into custody on August 5, Leyla Yunus did not receive appropriate food or medication for nearly two weeks and her condition declined.
In letters to her husband and in meetings with her lawyers, Leyla Yunus described ill-treatment by the prison authorities and her cellmate. In a statement, her lawyers reported that on September 23 a prison official twisted Yunus’s arms, took her to an empty cell, and hit her and pulled her hair, pulling some out, while berating her. Yunus reported the incident to prison officials but it was not investigated.
She also reported that she has been repeatedly attacked and beaten by her cellmate, which she believes was at the behest of the authorities. The incidents have not been effectively investigated nor have the authorities moved Yunus to a different cell. Instead, Yunus was reprimanded for banging on the door and calling for help after one attack. Yunus was also barred from making personal phone calls for a month.
International standards on the treatment of prisoners require the government of Azerbaijan to ensure that Leyla Yunus receives appropriate medical care for her health conditions, including providing necessary food and medications and, if necessary, transferring her to a hospital.
Police charged the Yunuses with treason and economic crimes when they were arrested on July 30. Leyla Yunus was sent to pretrial custody and Arif Yunus was initially released under house arrest because of his poor health. He has suffered two heart attacks in recent months. Police took him into custody on August 5, though, allegedly for violating the terms of his house arrest, as he tried to deliver food and medicine to his wife.
Remand hearings, which are usually closed, are pro forma proceedings lasting only a few minutes. They do not consider the merits of the case, only the appropriate pretrial restraining measure. Defendants are not always brought to court for the hearings. Leyla Yunus’s lawyer informed a relative that the prosecutor will file for a renewal of custody on October 23.
The authorities should take the opportunity of the end of Yunus’s initial custody period to drop the charges and release her, Human Rights Watch said. On October 17, President Ilham Aliyev issued a pardon for four youth activists and released them.
Over the last two-and-a-half years the government has brought or threatened unfounded criminal charges against 50 independent civil or opposition political activists. In the months since Azerbaijan assumed chairmanship of the Council of Europe, the region’s foremost human rights body, it has dramatically intensified its efforts to trammel peaceful activists and independent groups.
The authorities have arrested at least 11 people, including the Yunuses, and convicted at least 9 others on politically motivated charges, sentencing them to prison terms after flawed trials. Several prominent activists have fled or gone into hiding, fearing arrest on spurious charges.
The government has also recently introduced draft amendments to restrict foreign funding to independent groups, which would make it virtually impossible for them to operate in Azerbaijan’s already harsh climate for these groups.
Azerbaijan’s restrictions on civil society triggered a recent decision by the Extractive Industries Transparency Initiative (EITI) to require Azerbaijan to undergo a compliance check with EITI’s rules requiring respect for fundamental freedoms.
"Azerbaijan should end its assault on independent activists and show its international partners such as EITI and the Council of Europe that it is ready to play by the rules,” Denber said. "Azerbaijan’s partners should demand the release of all wrongfully imprisoned activists, including Leyla and Arif Yunus, and make clear there can be no business as usual until the crackdown ends.”