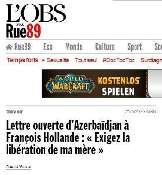 Prior to the Paris meeting of the presidents of France, Azerbaijan and Armenia,  Dinara, a daughter  of the arrested human rights activists  Leyla Yunus, sent an open letter to Francois Hollande, in which she asked the French President to facilitate the release of her parents:

Dear Mr. President, you met with my mother, prominent human rights defender, and Knight of the French Legion of Honor Leyla Yunus during your visit to Azerbaijan in May 2014. I would like to thank you for recognizing my mother’s efforts and inputs in human rights developments in Azerbaijan and her work by giving her such an honor to become a Knight of the French Legion of Honor. Unfortunately, your recognition meant nothing to the Azerbaijani authorities, and this summer my mother was detained, accused with absurd charges, and sent to Baku Investigative Prison No. 1.

My mum, you have seen her, is a small, fragile woman. She is now exposed to inhuman treatments in the pre-trial detention center. My mum is constantly humiliated, insulted and attacked in her cell by a hardened criminal inmate. Most disturbing is that a prison official viciously attacked my mum. He beat my mum on her head fiercely with his fist, pulled out her hair, causing her terrible pain and risk of blindness. My mum underwent two major operations on her eyes, and now she has crystal implants in both of her eyes.

Dear Mr. President, can you imagine something like that happening in your prisons? How would French citizens react if such an incident, where prison officials attacked a diabetic old woman, took place in a French prison? How would French citizens react if they heard that a Knight of the French Legion of Honor is exposed to such fierce attacks and humiliations and France is not actively intervening to release her? Mr. President, my mum, a fragile woman, is detained on falsified charges and deprived of any protection from her violent cell-mate, a repeat offender, from pre-trial detention staff and from the whole authoritarian Aliyev’s regime. Would France close its eyes to such injustice?

Not only my mum is behind the bars on falsified charges, but my dad, Arif Yunus, is too. They are facing a sentence from 15 years to life. Both of them are victims of their human rights work. My mum and dad dedicated the significant part of their lives -- 30 years -- to human rights work. Parents who never thought about their own safety and security, but thought about others. Parents who protected political prisoners and prisoners of conscience, and are now currently prisoners of conscience themselves. Parents who were already punished in 2012 when our private house - the Institute for Peace and Democracy was illegally demolished during Eurovision Song Contest, just because mum and dad were defending citizens who were deprived of their property rights. Parents who were deprived of seeing their daughter beside them for many years, forced to live apart, because of the danger human rights defenders and their families face in Azerbaijan.

Dear Mr. President, you are arranging this October a meeting between the presidents of Azerbaijan and Armenian. Indeed, you put a lot of effort with Minsk Group to find peaceful solution for the Karabakh conflict. It seems ironic that Ilham Aliyev, who speaks about the peaceful solution of Karabakh conflict, detains my parents who are working hard to achieve this peaceful solution by engaging in public dialogues. My parents were part of creating the first and unique website, where representatives of both Armenian and Azerbaijan societies could engage in public dialogues. These dialogues may bring peace and stability to the region.

Mr. President, my parents are not young anymore, they are old and ill. My dad has a weak heart and high blood pressure and mum is diabetic. Every day they stay in prison risks shortening their lives.

I want to see them free, smiling, holding each other again.

I want them to wish me Happy Birthday on October 18th.

Only your direct request to Ilham Aliyev may make a difference. I am asking you, Dear President, to demand that Ilham Aliyev release my parents immediately and unconditionally, as it is stated in the recently adopted resolution by European Parliament.

I am asking you to save my parents’ lives from the Azerbaijani authoritarian regime, two older people, and two prominent human rights defenders, one of whom is a Knight of the French Legion of Honor.

Now, Mr. President, does it matter if my parents are French or are Azerbaijanis? Does justice have a nationality?

Mr. President, the fundamental rule of our life – ‘strictly follow the letter of the law and the spirit of law” has always been the motto of my parents’ life.

My parents need your best support now, because tomorrow it could be too late for them.

Daughter of Arif and Leyla Yunus

Dinara Yunus: “Stay of my parents in custody is a matter of life and death”