Thorbj&#248;rn Jagland: Azerbaijan’s human rights are on a knife edge 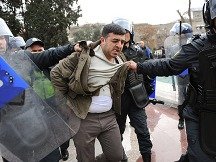 Azerbaijan’s human rights are on a knife edge, reads the article of Secretary General of the Council of Europe Thorbjorn Jagland, published on the site of the British newspaper The Guardian.

According to the article, Azerbaijan’s six-month chairmanship of the Committee of Ministers of the Council of Europe comes to an end in November, when it hands over to Belgium. Like the Eurovision song contest in Azerbaijan’s capital Baku in 2012, the chairmanship has been an opportunity for NGOs and activists to highlight the country’s numerous human rights violations. Much less is reported about how the Council of Europe itself confronts these violations.

"Earlier this month, the European court of human rights, which is part of the Council of Europe, confirmed an earlier decision ruling that Azerbaijan’s arrest and detention of Ilgar Mammadov, a well-known opposition politician and commentator, violated the European convention on human rights. The judgment was as critical as it was clear: the court concluded that "the actual purpose of his detention had been to silence or punish Mammadov for criticising the government and publishing information it was trying to hide”. A request from the authorities to have the case transferred to the grand chamber of the court was rejected. The 47 member states of the Council of Europe are bound by the convention to implement the court’s decisions, and I have urged the authorities in Azerbaijan to release Mammadov without delay,” writes the author.

"We are closely following several other trials against human rights defenders in Azerbaijan. I have called on Council of Europe member states with larger embassies in Baku to observe the current court proceedings. The UK has already responded positively. Several Azerbaijani and international NGOs, whose representatives I meet with regularly, complain that current legislation stifles their activities. I have tasked the Council of Europe’s group of international constitutional experts – the Venice Commission – with scrutinising Azerbaijan’s NGO-related laws, and their compatibility with the convention. Legal opinions of the commission are recognised globally, and member states cannot afford to ignore their advice. We have repeatedly warned Azerbaijan over its poor human rights record,” he said.

As noted in the article, Earlier this year, the Council of Europe’s human rights commissioner, Nils Muižnieks, issued a report on the freedom of assembly and expression in the country, in which he expresses his serious concern about the harassment and arrest of journalists. Muižnieks recently visited prominent activists including Anar Mammadli and Leyla Yunus in prison, and called on Azerbaijan to stop reprisals against human rights defenders.

"Following an agreement I reached with Aliyev last August, a Joint Working Group on Human Rights Issues – composed of human rights defenders, parliamentarians, officials of the presidential administration and a Council of Europe expert – recently met for the first time since 2008 in Baku. We intend this group to facilitate fresh talks between civil society and the Azerbaijani authorities, which I hope will lead to further releases of activists,” writes the author.

Acording to Thorbjorn Jagland, the case of Azerbaijan is also important in another regard. When politicians in established democracies such as the UK threaten to leave the ECHR for essentially domestic reasons, this is likely to have negative repercussions on the respect of fundamental freedoms in Europe’s younger democracies.

"Europe is already witnessing a serious erosion of minority rights, freedom of expression and judicial independence, as highlighted in the council’s 2014 consolidated report on the state of human rights, democracy and the rule of law. Urgent action is needed to stop this dangerous development, starting with a clear commitment of member governments to implement the European convention on human rights. In the interest of peace and stability, Europe’s leaders should promote the rule of law at the European level, not denounce it,” the author notes.