Opposition: The arrest of Ismaylovais associated with its exposure of the ruling elite 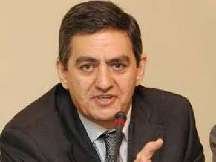 Opposition forces of Azerbaijan strongly condemn the arrest of journalist investigative Khadija Ismailova. The  leader of the Popular Front Party Ali Kerimli,  said that she is s subject to moral and physical pressure  for her  investigative reporting. "Khadija Khanum is the author of a number of serious corruption investigations related to the ruling family. The regime has not yet been able to refute the facts found by her.

In response, against her were mobilized all the state resources, tools and repressive arrest was in retaliation for her investigation. At the same time, this arrest  is an attempt to silence all the Azerbaijani society, " writes Kerimli on his page on Facebook.  "In spite of everything, our struggle for freedom will continue. We will defend till the end  Khadija and other political prisoners, " said Kerimli.

Conscious of the commitment of the authorities to arrest her, Ismailova did not hide abroad and not left the arena of struggle, continued to protect those who are victims of repression of those who plunders the wealth of the country, said Kerimli.

The Party "Umid"  regarded  the arrest of  Ismaylova not only as a serious blow to freedom of the media, but also attempt intimidate dissenters. "Umid" believes that the arrests of journalists and activists increase tension and confrontation in society, weaken trust, cause damage to the international image of the country, which may result in isolation of Azerbaijan in the democratic world.

The "Musavat" party notes that the arrest took place immediately after  the article by  head of the Presidential Administration, Ramiz Mehdiyev, where to put it bluntly accusations and threats to civil society, cooperating with Western institutions.  The were called a "fifth column" and Ismailova was mentioned personally.  The statements  by "Musavat"  says that it proves once again that Azerbaijan is governed not by the laws, but by orders.

"Musavat" party believes that the arrest of  Ismaylova is  related to her  investigation of business ties of the ruling family, condemns this iniquity, and it requires immediate release.