Arzu Abdullayeva: Human rights at the level of 1990 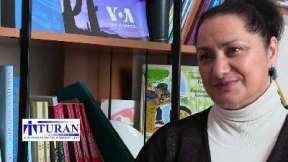 The current situation of human rights in Azerbaijan can be compared with the beginning of 90's, when human rights activists also worked under difficult conditions, said co-chairman of the Helsinki Citizens' Assembly (HCA) Arzu Abdullayeva in an interview with Turan, commenting on the current situation in Azerbaijan. Then it was  to influence  the government policy, there were many arrests.

Now the situation is similar, although the international organizations, media, and civil society protect human rights, but it does not help, she said. Does Azerbaijan fulfill international obligations in the field of human rights? Answering this question, Abdullayeva said, "Yes, performs, but very slowly. In 2001, when joining the Council of Europe, Azerbaijan has made a commitment to release political prisoners. Then there were 716. They were released  in groups, gradually. But there were new," said Abdullayeva.

The obligation in the field of legislation  were  fulfilled, but the problem was in their application. Now regressive changes are made to the law. The only positive step in the matter of political prisoners Abdullayeva considers the creation of the Joint Working Group on Human Rights. The "Dialogue is  necessary. We need to put forward their arguments, and listen to the other side," she said. The  are already small positive steps, and the expected pardon can show positive activity of the working group, said human rights activist. "However, one pardon does not solve the problem. Political will of the authorities is necessary," said Abdullayev.

In her opinion, the authorities fear  that  the Ukrainian events on  Maidan will repeat in Azerbaijan and therefore the power  arrests activists and closes their offices.

"I hope that we will find the way out of the situation," said Abdullayeva. The world practice shows that this situation is only annoying, prepares the ground for revolution. Misunderstanding, hatred, frustration can lead the situation in a dangerous direction,  she believes.