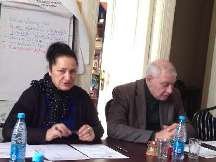 The human rights situation in Azerbaijan and Georgia was discussed at the conference on the theme "Human Rights and Conflicts in the South Caucasus" in Baku today.

The event was organized by the Helsinki Citizens' Assembly (HCA) with the support of the Friedrich Ebert Foundation.

Opening the meeting, the co-chairman of the HCA Arzu Abdullayeva noted with regret that in the countries of the South Caucasus the concept of democracy is subject to revision and is perceived differently than its true value. In the countries of the region, there are problems with the self-realization of civil society and the fulfillment of its purpose for public control.

The head of the Georgian Foundation Former Political Prisoners for Human Rights Nana Kakabadze spoke about the human rights issues in the country.

According to her, in 2012, at Georgia's parliamentary elections there was a peaceful change of power for the first time and this put an end to the "anti-democratic rule" of Mikheil Saakashvili.

Under Saakashvili the parliament acted as the Supreme Council of the Soviet era and was directed by the laws of presidential power, while now there is a coalition of six parties in the parliament and it is independent.

Under the previous regime there was total control over the citizens and racketeering at the state level. Georgia ranked first in Europe in the number of prisoners – 25,000. There were 600 for every 100,000 people, with the European standard of 150 per 100,000.

After the change of government in the Ministry of Interior there were found three thousand files with materials of wiretaps and lurks of the citizens.

Under the new government there is improvement, but the problem is not solved. Expectations of justice by the citizens are not fully justified.

Political prisoners have been released, but they cannot achieve full recovery in the prosecutor's office and the courts. The government also does not show interest in this, for fear of the costs of compensation.

The former head of the Prison Service, under whom the prison was a widespread practice of torture, received a total of three years in jail only for unethical treatment of a subordinate.

According to Kakabadze, the West is not interested in investigating the iniquities of the previous government, because they constantly patronized Saakashvili, calling him a "beacon of democracy."

The human rights activist noted that the greatest hope for changing the situation relates to the change of the judiciary in 2015.

The head of the Association of Internally Displaced Women, Julia Kharishvili noted that, although the new government comes in contact with civil society, in practice the results of the dialogue are not enough.

The head of the Azerbaijani Society for Women's Rights, Novella Jafaroglu focused attention on the problem of political prisoners in Azerbaijan, the number of which has increased dramatically this year.

Jafaroglu hoped that much of the political prisoners will be released before the end of the year, and next year certain reforms will start.

In her view, these steps can ease the tension in the society and promote mutual trust and the consolidation of the citizens.

In the afternoon, the conference was planned to discuss reports on the conflicts in the South Caucasus.

Arzu Abdullayeva: Human rights at the level of 1990