The Committee to Protect Journalists: the 2014 year is the worst 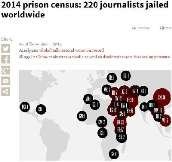 The  Committee to Protect Journalists (CPJ) publishes annual data  on journalists in jail. More than 200 journalists are imprisoned for their work for the third consecutive year, reflecting a global surge in authoritarianism. China is the world’s worst jailer of journalists in 2014.

The Committee to Protect Journalists identified 220 journalists in jail around the world in 2014, an increase of nine from 2013. The tally marks the second-highest number of journalists in jail since CPJ began taking an annual census of imprisoned journalists in 1990, and highlights a resurgence of authoritarian governments in countries such as China, Ethiopia, Burma, and Egypt.

China’s use of anti-state charges and Iran’s revolving door policy in imprisoning reporters, bloggers, editors, and photographers earned the two countries the dubious distinction of being the world’s worst and second worst jailers of journalists, respectively. Together, China and Iran are holding a third of journalists jailed globally—despite speculation that new leaders who took the reins in each country in 2013 might implement liberal reforms.

The 44 journalists in Chinese jails are a jump from 32 the previous year, and reflect the pressure that President Xi Jinping has exerted on media, lawyers, dissidents, and academics to toe the government line. In addition to jailing journalists, Beijing has issued restrictive new rules about what can be covered and denied visas to international journalists. Coverage of ethnic minority issues continues to be sensitive; almost half of those jailed are Tibetan or Uighur, including academic and blogger Ilham Tohti and seven students imprisoned for working on his website, Uighurbiz. Twenty-nine of the journalists behind bars in China were held on anti-state charges. (Read detailed accounts of each imprisoned journalist here.)

The administration of Iranian President Hassan Rouhani has also maintained repressive measures against the press. This year, Iranian authorities were holding 30 journalists in jail, down from 35 in 2013 and a record high of 45 in 2012. CPJ’s 2014 International Press Freedom Award winner Siamak Ghaderi was released from prison in July, but that same month, Iranian authorities jailed Jason Rezaian, a Washington Post reporter. By late 2014, the government had still not disclosed the reason for Rezaian’s arrest or the nature of charges against him.

The list of the top 10 worst jailers of journalists was rounded out by Eritrea, Ethiopia, Vietnam, Syria, Egypt, Burma, Azerbaijan, and Turkey. The prison census accounts only for journalists in government custody and does not include those in the captivity of non-state groups. For example, CPJ estimates that approximately 20 journalists are missing in Syria, many of whom are believed held by the militant group Islamic State.

Turkey, which was the world’s worst jailer in 2012 and 2013, released dozens of journalists this year, bringing to seven the number of journalists behind bars on the date of CPJ’s census. However, on December 14, Turkey detained several more journalists—along with television producers, scriptwriters, and police officers—and accused them of conspiring against the Turkish state, according to news reports. The detentions were born of a political struggle between President Recep Tayyip Erdoğan and the ruling party and the movement led by U.S.-based cleric Fethullah Gülen, and included the editor-in-chief of one of Turkey's largest dailies, Zaman, which is aligned with Gülen.

In Eritrea, which has consistently ranked among the world’s worst jailers and is ranked third this year, authorities are holding 23 journalists, all without charge, and have refused to disclose the prisoners’ health or whereabouts. In 2014, CPJ conducted a fresh investigation into the status of long-held prisoners in the extremely repressive country; the probe led to the addition or removal of a handful of cases but yielded little information about many of those long jailed.

A state crackdown on independent publications and bloggers in Ethiopia this year more than doubled the number of journalists imprisoned to 17 from seven the previous year, and prompted several journalists to flee into exile, according to CPJ research.

For the first time since 2011, Burma had journalists in jail on the date of CPJ’s census: at least 10 were imprisoned, all on anti-state charges. In July, five staff members of the Unity weekly news journal were sentenced to 10 years in prison each under the 1923 Official Secrets Act. Rather than reforming draconian and outdated security laws, President Thein Sein’s government is using the laws to imprison journalists.

In Azerbaijan, authorities were jailing nine journalists, up one from the previous year. Amid a crackdown on traditional media, some activists took to social networking sites in an attempt to give the public an alternative to state media. CPJ’s list does not include at least four activists imprisoned in Azerbaijan this year for creating and managing Facebook groups on which they and others posted a mix of commentary and news articles about human rights abuses and allegations of widespread corruption.

Egypt more than doubled its number of journalists behind bars to at least 12, including three journalists from the international network Al-Jazeera.

In recent years, journalist jailings in the Americas have become increasingly rare, with one documented in each 2012 and 2013. This year, the region has two: a Cuban blogger was sentenced to five years in prison in retaliation for his critical blog, and in Mexico, an independent journalist and activist for Mayan causes has been charged with sedition.

Other trends and details that emerged in CPJ’s research include:

* Worldwide, 132 journalists, or 60 percent, were jailed on anti-state charges such as subversion or terrorism­. That is far higher than any other type of charge, such as defamation or insult, but roughly in line with the proportion of anti-state charges in previous years.

* Twenty percent, or 45, of the journalists imprisoned globally were being held with no charge disclosed.

* Online journalists accounted for more than half, or 119, of the imprisoned journalists. Eighty-three worked in print, 15 in radio, and 14 in television.

* Roughly one-third, or 67, of the journalists in jail around the world were freelancers, around the same proportion as in 2013.

* Countries that appeared on the 2014 prison census after jailing no journalists in the 2013 survey were Cameroon, Swaziland, Mexico, Cuba, Burma, and Belarus.

CPJ defines journalists as people who cover the news or comment on public affairs in media, including print, photographs, radio, television, and online. In its annual prison census, CPJ includes only those journalists who it has confirmed have been imprisoned in relation to their work.

CPJ believes that journalists should not be imprisoned for doing their jobs. The organization has sent letters expressing its serious concerns to each country that has imprisoned a journalist. In the past year, CPJ advocacy led to the early release of at least 41 imprisoned journalists worldwide.

CPJ’s list is a snapshot of those incarcerated at 12:01 a.m. on December 1, 2014. It does not include the many journalists imprisoned and released throughout the year; accounts of those cases can be found at www.cpj.org. Journalists remain on CPJ’s list until the organization determines with reasonable certainty that they have been released or have died in custody. Journalists who either disappear or are abducted by nonstate entities such as criminal gangs or militant groups are not included on the prison census. Their cases are classified as "missing” or "abducted.”

According to the agency Turan, by December 17, 2014 there are 10 journalists and  six bloggers under investigation or serving a sentence. Local human rights organizations point to 9 journalists and  two bloggers. The difference is that the agency recognizes bloggers all Internet activists, regardless of their membership in political parties. Human rights activists do not consider bloggers activists of the opposition parties.

It is noteworthy that none of the 16 imprisoned journalists and bloggers are convicted of law on defamation. All of them were charged with other offenses (drugs, bullying, etc.)

110 journalists were killed in 2015 - Reporters Without Borders