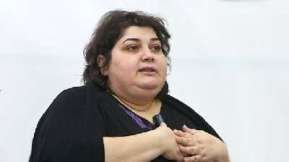 The investigative journalist Khadija Ismayilova, a leading figure in the battle for press freedom in Azerbaijan, was arrested on 5 December. Reporters Without Borders has launched a petition to demand her release and for the senseless charges against her to be dropped.

Ismayilova, an award-winning journalist and figurehead of independent journalism in Azerbaijan, joins the ranks of the 100 political prisoners in the country. She foresaw her arrest, but despite the growing harassment to which she has been subjected for many years, nothing could persuade her to leave the country for which she has fought for years with exceptional courage and persistence.

She is the former director of the Azerbaijani service of Radio Free Europe/Radio Liberty, banned from the airwaves since 2009, who now works for various news outlets. She devotes herself to the most taboo subjects such as the dominance of the all-powerful presidential clan in the country’s most lucrative businesses, conflicts of interest and high-level corruption. The day before she was arrested, the president’s chief of staff, Ramiz Mehdiyev, referred to her by name in a speech violently denouncing an Azerbaijani "fifth column” and foreign attempts to destabilise the country. As part of its efforts to eliminate media pluralism, the government of President Ilham Aliyev placed her in preventive detention for a minimum of two months, accusing her of driving a former colleague to attempt suicide. Such a charge against the human rights campaigner, who has previously faced allegations of spying and libel, is patently absurd. Ismayilova joins nine other journalists and at least five bloggers in custody, all imprisoned because of their professional activities. Reporters Without Borders calls for their immediate and unconditional release.

"In imprisoning a journalist of such worldwide repute as Khadija Ismayilova, the Baku authorities have given a huge slap in the face to all those who believe in freedom of information and human rights,” said Reporters Without Borders secretary-general Christophe Deloire. "The government of Ilham Aliyev orchestrated an unprecedented crackdown while Azerbaijan held the chairmanship of the Council of Europe and has now expressed in the clearest possible terms its feeling of complete impunity. It’s high time it was proved wrong.”

Defiant in the face of threats

In 2011, Ismayilova disclosed that Aliyev’s two daughters, through a front company, had shares in the flourishing Telecoms firm Azercell, which has a monopoly on 3G access in Azerbaijan despite suspicions surrounding its entry into the market.

A year later, she and a colleague, Nushabe Fatullayeva, disclosed that the two women also had shares in a gold and silver mine recently opened in the village of Chovdar. Besides entailing environmental risks, the operation involved the purchase of land on the cheap and the destruction of the local infrastructure. At the time, Ismayilova was the victim of a smear campaigninvolving an explicit video. Far from giving up, she exposed these machinations and published her exposé of the president’s family again. The video was posted online and she was the target of a vilification campaign in the official media. The campaign was revived the following year after the publication of a second video.

Instead of being discouraged, in 2013 she contributed to an investigation by the International Consortium of Investigative Journalists which disclosed that the president’s family had shares in companies based in the British Virgin Islands which benefited from lucrative building contracts in Baku. As the Azerbaijani authorities stepped up their repressive efforts, the pressure on Ismayilova increased. She was accused of spying, libel, and taking part in an unauthorized demonstration, She was detained at the airport and finally barred from leaving the country in October this year.

Her activities have recently entered a new dimension. After most of Azerbaijan’s human rights activists were arrested, she has gradually filled some of the gap. She contributed to the compilation of a list of political prisoners, fought to organized legal support and assistance for families and tirelessly kept the international community informed about her country’s headlong plunge into the abyss as far as respect for human rights were concerned. Before repression reached a new high this year, Azerbaijan was ranked in 160th place of 180 countries in the latest World Press Freedom Index published by Reporters Without Borders.

Help us to free Khadija Ismayilova by signing the petition.