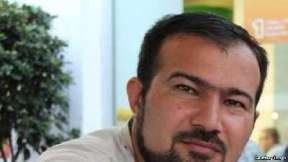 On Thursday,  at the trial in the case of Seymour Hazy, a journalist of the "Azadlig" newspaper and the Internet channel "Azerbaijan Saat",  witnesses were questioned. The trial in the Absheron court was chaired by Shovket Najafova.

The journalist is accused of hooliganism "with  use of weapons." On August 29 at the bus stop in the village of  Jeyranbatan unknown approached the journalist and insulted him, asking him not to write in  the Facebook. Then he attacked Hazy and began to beat him. In self-defense, the attacker hit Hazy  with a bottle. Immediately police came, detained Hazy, and took him to the police. Two witnesses in the case denied testimony attributed to them. So, Natiq Agaverdiev said that he was  sitting in a tea house, and went to the noise in the street. "When we came out,  the police put  someone in a police car and took  away. What is written in the record on my behalf is not true, I did not say or write. When I came out, there was a policeman who asked if I saw anything, I said no, but I was taken to the police. There was a major, who wrote everything, and made me or me has recorded testimony and told me to sign.

I cannot write in Latin and asked  the major to  write and not to add anything, he assured me that he wrote what I said," said the witness. The second witness in the case,  Akif Mustafayev, said almost the same thing.

Further, lawyers began to ask questions the "victim” Hasanov Maharram. It turned out, this person does not know what is  Facebook, and  does not know how to use it. So, he could not answer questions such as: what language  is his page in Facebook? What sort of materials, to whom and when he wrote, who wrote to him, who are his friends, and so forth. The most interesting thing is that he told the court that did not open Facebook page and wrote nothing Seymour Ghazi.

The lawyer Adil Ismailov asked the judge to give a request to the Ministry of Communications and find out who opened a page on the name  of Hasanov Maharram? However,  the prosecutor opposed it. He said that "it is their right to privacy." The judge upheld the opinion of the prosecutor.

Seymour Ghazi said that today's  testimonies show that the case was ordered. He also accused the authorities of jail  for not allowing him to communicate with family, and do not even pass the letters he writes.

Trial on the case of Editor-in-Chief of “Tolyshi Sado” newspaper in Azerbaijan deferred till July, 3