“Time is on nobody’s side,” Azeri, Armenian analysts discussed Karabakh in Washington 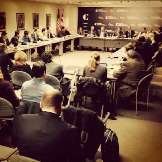 A group of Azerbaijani and Armenian civil society actors and representatives of the US, European think-tanks gathered in Washington, D.C. Dec. 18, to discuss Nagorno-Karabakh peace process and the prospects ahead, TURAN’s US correspondent reports.

The event, orginized by the Carnegie Endowment for International Peace, focused on the a framework document on resolving the conflict named "Madrid Principles,” which was put on paper by the OSCE Minsk Group co-chairs in November 2007.

"These basic [Madrid] principles have been the basis for negotiations, but no breakthrough has been made,” Carnegie’s Thomas de Waal, a senior associate on the Caucasus issues, said.

Laurence Broers from the Conciliation Resources, a London-based NGO, said that Madrid Principles have been "longest lasting Armenia Azerbaijan peace proposal”, which means parties find a lot that is acceptable in them.

In the meantime, he said, implementations of the principles are far beyond institutional capacities today, underlines governance deficit, which needs addressing.

In Azerbaijan, many people "don't trust Madrid principles,” according to Avaz Hasanov, director of the Baku-based Society for Humanitarian Research.

"Relations between the people are not deployed for almost 20 years,” he said. Borders are closed and conflict suffers from lack of confidence building.

Tabib Huseynov, Caucasus Program Manager at Safe world, explained that for many in both Azerbaijan and Armenia, Madrid Principles are "not entirely clear; all we know is summery of them.”

If properly modified, Huseynov said, the principles would "fundamentally meet” the interests of both sides, thus they reflects theses of both "package" and "step-by-step" approaches to the conflict.

"Madrid principles are a small hope because we don't have any other ideas... It has been around for years and implements the core of the problem,” he added.

In the meantime, he said, the sides should accept that the conflict doesn't have "real political options,” therefore the principles shouldn’t be "politicized.”

"Starting from the final status would be building house without roof,” he said.

Laurence Broers added part of the problem is that both sides believe the time is on their side: Azerbaijan relies on its oil while Armenia believes maintaining status-quo is of their interest.

Another serious problem is that the political leaders sometimes say one thing, and do another as they meet behind the table, the participants said.

"Time is on side of risk of escalation,” Broersadded. "Longer that negotiations go on, harder a solution becomes.”