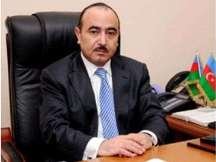 The head of the Socio-Political Department of the Administration of President Ali Hasanov has once again accused the West.

In an interview with Azertaj on the results of 2014 Hasanov said that hundreds of media and NGOs operate in Azerbaijan "unhindered and free". The only requirement of the government of Azerbaijan is non-admissibility of "abuse" of democratic freedoms by NGOs and the media.

"The laws of Azerbaijan and the international law have no special privileges for crimes committed by members of any profession to let them avoid liability," Hasanov said.

Recently, however, bias and double standards towards Azerbaijan have been shown by certain circles in the US and the EU and certain international organizations are already breaking the entire ethical framework, which does not fit into the partnership, contrary to the principles of cooperation, lamented Hasanov.

Officials and a number of media and civil society institutions consider Azerbaijan under a microscope, although within these countries there are violations of human rights and discrimination on religious and ethnic grounds.

"Therefore, those who do not see any serious problems in their countries have no right to criticize us," said Hasanov.

According to him, Azerbaijan under no circumstances will sacrifice its state and national interests for the sake of any international organizations or countries.

"They have to understand that Azerbaijan is an independent state carrying out its policies in accordance with the will of the people, and further no pressure or threats or non-diplomatic rhetoric will give any results and all the unfounded allegations will be given an adequate response," Hasanov stated.

We must return international donors in Azerbaijan