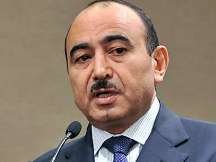 Assistant of the President of Azerbaijan  for socio-political issues Ali Hasanov regarded the calls by international human rights organizations to release political prisoners on the eve of the European game as a campaign of "black PR" against Azerbaijan.

"Unfortunately, some local and foreign circles are trying to denigrate the achievements of Azerbaijan in the economic, social, political, humanitarian and other spheres, and to make the European game the main theme of black PR against Azerbaijan.

The call of  «Amnesty International» to boycott European Games, the distribution of foreign media custom, prejudiced, biased materials in connection with the Games, clearly prove the existence of such attempts, " Hasanov said in an interview reported.

In addition, some interested forces led by "Radio Azadlig" spread in social networks and share videos about alleged mistreatment of animals.

Hasanov said: "These videos could not prove that the events are taking place in Azerbaijan." "This once again suggests an attempt to tarnish the image of the country on the eve of the European Games, and begin overt provocation against such an important international event,"  said Hasanov, and compared this campaign with a "provocation" during the contest "Eurovision-2012".