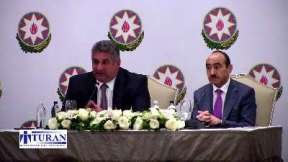 Azerbaijan has no political prisoners,  Assistant to the President on social and political issues Ali Hasanov told local and foreign journalists at a press conference on the eve of European Games.

Answering the question of the TV channel "Al Jazeera", "When will the political prisoners be released?" Hasanov said: "We believe that Azerbaijan has no political prisoners. There are convicted of certain acts. There are court decisions against them, and none  executive branch may  question the decisions of the courts, " said Hasanov. According to him, the courts in Azerbaijan are independent and act according to the norms of law.

"In Azerbaijan, there are conditions for free political activity, 55 political parties can hold meetings, demonstrations, protests, participate in elections. Acampaign on political prisoners in Azerbaijan launched by some circles , has no basis," Hasanov said.

Asking the question why the country did not  allow the arrival of the  delegation of Amnesty International, Hasanov said that the organization "has not passed the accreditation."

Regarding the participation of Armenian athletes in the European Games, Hasanov expressed the hope that the sport will contribute to the rapprochement of the Azerbaijani and Armenian peoples.

In turn, the Minister of Youth and Sports Azad Rahimov said that the budget of European Games totaled  960 million Euro. In fact, a little over one billion manat were spent. In the view of 34% devaluation of the manat, there was  "even some saving," said Rahimov.

Asking the question on the corruption Rahimov almost offended, said that they are ready to retire if the audit identifies theft of  at least $1." 03