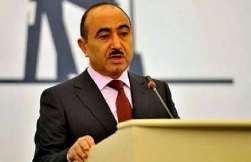 Ali Hasanov, the assistant  of the president of Azerbaijan said in an interview to "Rossiyskaya Gazeta" that in  2015 Azerbaijan has achieved good economic  results, reducing unemployment to 5%. International rating agencies write about the stability of the economy. Regarding the decline in oil prices, he said that "despite the raging global crisis", the economic growth is observed in the country.  Among the priorities for the future, he called the development of non-oil sector, strengthening financial discipline, implementation of priority investment projects, and so forth. Considerable attention will be paid to agriculture – creation  of large farms, putting  into circulation tens of thousands of hectares of land. The goal  is to ensure food safety.

However, Azerbaijan's enemies in the West are dissatisfied  with  "an independent political course of Azerbaijan,  and launched against  Baku something like a" crusade. " Defamatory statements about human rights violations   are  "an attempt by some Western circles to exert pressure on the country and dictate the rules of the game." Unfortunately, the success of modern Azerbaijan causes great concern and the open hostility of certain forces who do not want the development of our country and strengthening its image, said Hasanov.  Concerning  the relations with Russia, he said that Russia  is traditionally a priority direction of the foreign policy of Azerbaijan. Today, the Azerbaijani-Russian relations have acquired a strategic partnership.

"We actively cooperate and support each other in the international arena, including in the framework of international organizations. Suffice it to recall last year's situation in the PACE when the Azerbaijani delegation at full strength opposed sanctions against Russia," Hasanov reported. ( PACE demanded from Russia to respect the territorial integrity of Ukraine in connection with the occupation of the Crimea. However, Azerbaijan chose to support the aggressor, and did not defend the territorial integrity of Ukraine. - ed).