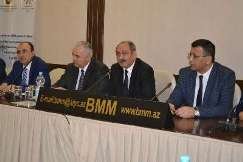 The NGO Forum was held on Wednesday at the International Press Center hearings on the topic: "The modern world - a double standard."

The Head of the Forum Rauf Zeyni said that Azerbaijan, after the integration into the international community, has fulfilled all its obligations. However, "some states, establishing world order, do not comply with the rules."

The countries that are "the cradle of democracy and freedom heralds" want to take from the independent countries their independence, he said. The Chairman of the Press Council, Aflatun Amashov, accused Western countries of double standards regarding the Karabakh conflict.

Then he  blamed the current US Secretary of State John Kerry for unresolved Nagorno-Karabakh conflict. As evidence Amashev remembered the appeal of  Kerry in the 90 years to the then Soviet leadership with a call to protect the rights of Armenians, whom suppresses Azerbaijan.

Amashov said that such major media media  as CNN, BBC, "Al Jazeera" are not independent, and serve the interests of individual States.

The existing conflicts in Africa, Asia and South America are the result of the double standards of the West Azerbaijan and civil institutions must make an effort to change the existing view in the West in favor of Azerbaijan, he concluded.

The head of the Karabakh Liberation Organization, Akif Nagi, regarded the events taking  place in the world as a clash between the Christian and Islamic civilizations. Because Azerbaijan has taken its place in Islamic civilization , it has been criticized by the West. To improve the situation there must be a unity, and NGOs should take the lead in this area.

Journalist Gafar Chakhmagli criticized the policy of the West, accusing of complicity in Armenia, urged NGOs to activate in social networks.

A writer Aydin said that the West has moved from classic Cold War to the war on religious grounds. So, he heaped the  "Arab Spring", the emergence of LIH and cartoons in the magazine "Charlie Hebdo", calling it all a result of the policy of the West. Inspired by his "discoveries", he agreed to the fact that public protests in Azerbaijan are also a result of Western policy.

The  panelists decided to meet regularly to expose the machinations of the West.