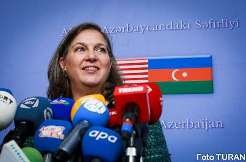 "We had very good, meaningful and sincere talks with President Aliyev and Minister Mammadyarov.

My main message at these meetings was that we highly value our 20 years of cooperation with Azerbaijan. We want to see it even stronger, more democratic and independent and continue to cooperate in the fields of security, economy, energy, and, as much as possible make efforts in the scope of democracy," Nuland said at a briefing at the US Embassy after the talks.

Among other priorities of cooperation she called the fight against extremism and terrorism, in which the United States will continue to support the security agencies of Azerbaijan.

Security issues contact with energy and in particular the safety of oil and pipelines This topic is updated in the light of the Southern Gas Corridor project, which ensures the independence of Europe from a single source of gas. The US and EU are actively supporting this project.

"We also talked about diversifying the economy of Azerbaijan in order to develop non-oil sector and economic reforms. The President himself today expressed his determination to fight corruption, which is a killer of democracy and hinders foreign investment and we agreed to continue joint efforts in this direction," Nuland said.

The sides also touched upon the Karabakh settlement, despite the OSCE Minsk Group staying in the region. "We are very concerned about the outbreak of violence in the conflict zone and I will continue negotiations on this issue in Armenia, because both sides are responsible for the situation," said Nuland.

"We are of course talking about democracy and human rights. Open and good contact between the government and civil society is crucial for the future of the country and the United States supports it.

Today we talked about US concerns on this issue, the human rights situation and problems of the media. We agreed to continue consultations on this issue and strengthen them through the US-Azerbaijani dialogue on civil society and democracy. It is about creating a bilateral structure, which will run in parallel with the structures of the Council of Europe," said Assistant Secretary of State.

She added that there is an agreement on enhancing student exchange programs Fulbright, IREX, Flex, so that young people from Azerbaijan could learn in the United States.

On the question of Turan IA how the United States regards the accusations against Washington on the preparation of a color revolution in Azerbaijan, Nuland said that such a revolution is possible when there is no dialogue between government and civil society and ordinary people. It happens when the doors are locked and the authorities do not hear the problems and do not want to discuss them. "That's why we are in favor of a strong dialogue between the authorities and civil society, which will resolve existing problems," said Nuland.

Asked about the tension on the front lines, the Assistant Secretary of State noted that she has already expressed her opinion in Baku and will repeat it in Armenia, regarding the need to respect the truce. With regard to the Azerbaijani hostages, Nuland said that they should be returned for humanitarian reasons, and she will raise the issue in Yerevan tomorrow.

B.Brink: energy, security and democracy are priorities of the United States

R. Cekuta: One of the main topics of discussion is human rights and democracy