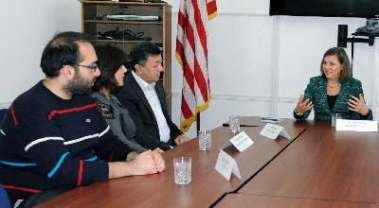 On Tuesday in Baku the U.S. Assistant Secretary Victoria Nuland met with representatives of civil society in Azerbaijan. The meeting was attended by the head of the Union of Journalists and editor of the newspaper "Zerkalo" Elchin Shikhli, chairman of the  NIDA youth movement Turgut Gambar and Marshall Fund representative, Mehriban Rahimli.

According to Elchin Shikhli, during the meeting  the issues of civil society, the existing restrictions and tougher laws were raised. Facts of harassment and arrests of activists, the impossibility of the normal functioning of NGOs and the media were noted.  The names of the arrested journalists Khadija Ismayilova, Rauf Mirkadyrov and others were mentioned.

Nuland said that  she has been informed about the situation, confirming the continued US support for democracy and human rights. She said that Washington maintains an ongoing dialogue with official Baku on these issues, and monitors the situation.