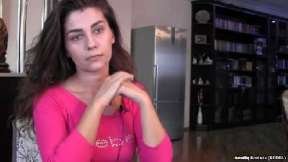 Baku Yasamal District Court on February 20 sentenced the daughter of the head of the National Council of Democratic Forces (NCDF) Jamil Hasanli, Gunel Gasanli, to 1.5 years of imprisonment with serving her sentence in a penal colony.

She was found guilty of committing a traffic accident in Baku on 19 September 2014.

This was reported by a member of the NCDF Coordination Center Oktay Gyulalyev.

The court did not take into account the presence of two young children at Gunel Hasanli, the lack of complaints from the 86-year-old woman recognized injured, and without a previous criminal record of the accused.

As Jamil Hasanli previously reported himself, in reality, it was not an accident, as the elderly woman fell in front of the car. However, the woman wanted Gunel to take her to hospital. Along with them police also went to the hospital. Due to the fact that the woman was not damaged, they felt no need to register the incident on the day.

This topic was launched after on September 29 PFPA decided to join the opposition rally and NCDF also supported the action.

On September 29 Gunel was called to the police and the incident was formalized. After inspecting the car they initially wanted to let Gunel go, but a phone call from the top caused their decision to take the car to the penalty area.

Jamil Hasanli explains the criminal proceedings and sentencing at the court with his political activities.

At the same time he points to the biased nature of the investigation and examination of the "aggravating circumstances". In reality, no one received serious damage.

The verdict is not yet in force and it will be appealed to the Court of Appeal.