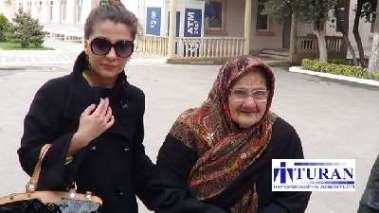 Baku Appeal Court chaired by Aflatun Gasimov  considered  the complaint  of the 87-year-old Adela Salimova. This woman is recognized as a victim in the trial  of Gunel Hasanli, daughter of Jamil Hasanli, the head of the National Council of Democratic Forces.

On February 22  the Yasamal court found Gunel Hasanli guilty of running over Adela Salimova on  September 19, 2014, and sentenced her to  a year and a half imprisonment.

However, the  "victim" Adela Salimova found it unreasonable punishment. She said that Gunel did not hit   her by car, but rather helped her on the street when she felt. In this regard, Salimova  asks the court to release Gunel Hasanli from punishment.

The lawyer Adil Ismaylov called investigation in this case "unfair and biased." He noted that the forensic examination was carried out in violation of the law. In fact there are no materials confirming expert opinion. In addition, Salimova does not consider herself a "victim”, and demands to abolish the sentence, the lawyer said. Nevertheless, the judge Aflatun Gasimov said that the trial court did not allow violations of the law. Next he appointed examination of the merits for April 24, 15: 00.