Resolution of the action on the occasion of the 10th anniversary of the assassination of Elmar Huseynov, the chief editor of the magazine Monitor 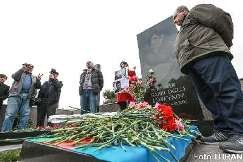 Ten years past since  the assassination of Elmar Huseynov, the chief editor of the magazine Monitor, irreconcilable criticism of the vices of the Azerbaijani society and government. He was killed  on  March 2, 2005 at the threshold of his house, but so far the organizers and perpetrators of the crime are not brought to justice and are punished. Murder of Elmar Huseynov opened a new page of the  policy of suppressing freedom of speech in Azerbaijan, which was characterized by another murder - journalist Rafiq Tagi, severe beatings, arrests, journalists, bloggers critical of the policy of the authorities in the various spheres of national life.

The economic foundations of the independent media have been undermined  completely, the illegal financing of the press by the regime took the unprecedented scale, and has become another means of controlling the media community.

The Azerbaijani media has almost forgotten principles of objectivity, balance, pluralism, the service of truth. This situation is causing serious damage to society and social relations that are disoriented by the media, which leads to decision-making and inadequate false perception of reality. And this, in turn, is projected on all aspects of society, which as a result of such information policy entered a period of economic, political and moral crisis. The way out of it can and should become first full restoration of freedom of speech as the cornerstone of a healthy democracy.

In this regard, we urge the Azerbaijani authorities to:

1. Bring to justice and punish the organizers and perpetrators of the murder of Elmar Huseynov, Rafiq Tagi.

4. To stop  criminal cases against journalists

5. To adopt law on defamation.

6. To create  conditions for free economic development based on transparency, fair competition.

7. To bring the volume of media advertising market to international standards - 1% of GDP, where at least 50% must come to the print and online media.

8. To bring a number  of newsstands to international standards - 1 Stand by 1.5 thousand. People, as well as ensure smooth sale of newspapers on shopping sites, gas stations and city streets.

9. To provide quality of the Internet to international standards, both in quality and price, in order to improve the quality and accessibility of online media.

10. Adopt a government program to promote freedom of speech and media in Azerbaijan.