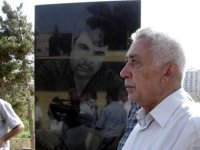 "There is nothing new in journalist Elmar Huseynov's murder case. No one is interested in this case anymore, it is closed. I turned to many instances, but then I realized that it's pointless," told father of murdered journalist Sabir Huseynov at the interview given to the “Media Forum”, reports Azerbaijani news portal "Haqqin.az."

According to him, the version that Elmar Huseynov’s murderers had arrived from Georgia, is implausible, and the Azerbaijani authorities are involved in that murder.

"8 years have passed since the day of the murder. The day will come when the case will be disclosed. I ask the God for one thing only, to let me live till that day. I am not afraid of death. I'm not afraid of anything after Elmar’s death," Sabir Huseynov said.

He also noted that he blames himself for asking Elmar to return to Azerbaijan.

"After graduation, Elmar spent 4 years working in Russia. It was my fault; I persuaded him to return to Azerbaijan. He was living there and was working as director of the plant. I made a big mistake," he said.

Father of murdered journalists in Baku also said that he has no relation with his son’s family. "Daughter-in-law, had gone to Norway with his son, and we have lost ties. It is possible that after the disclosure of the murder they return to Azerbaijan," Sabir Huseynov said.

38-year-old editor-in- chief of the Azerbaijani oppositionist magazine "Monitor", Elmar Huseynov, was killed by an unknown person at the door of his apartment in the evening of March 2, 2005. The next day, the Azerbaijani president condemned the crime publicly and promised to do everything for its quick disclosure, however more than 8 years have passed since then, while the criminals have not been punished yet, this speaks of the unwillingness of the authorities to investigate the case.

Huseynov's colleagues, as well as a number of human rights activists and public figures of Azerbaijan, said that authorities of the republic were involved in the murder of the prominent journalist.

Resolution of the action on the occasion of the 10th anniversary of the assassination of Elmar Huseynov, the chief editor of the magazine Monitor