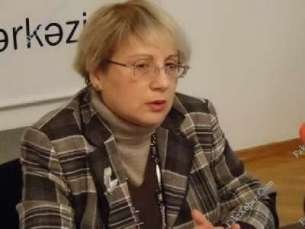 On June 30, 2014 me and my husband Arif were accused in committing number of grave crimes, including treason with falsified charges. Then I was placed into the detention facility in Kurdakhani.

On August 5 they have arrested Arif and brought him to Kurdakhani detention facility.

On August 7, he was taken to the Ministry of National Security’s detention place.

I have been dealing with the political prisoners issue and am very well aware of tortures applied by the MNS.

I perfectly understand the intention to physically destroy my family - Arif and myself.

In 2005 right after the murder of Elmar Huseynov, I was warned that my assassination is also planned. Of course, I was afraid. Evidently, the decision to kill me was cancelled as we made this information public .

But the bloody tyranny does not have any limitations in 2014. I realize that Arif and I will be tortured brutally and to death. ...

Dear supporters, talk about this, Speak UP!

Raise your voice, make yourself heard. Let them hear and know what kind of bloody tyranny is running Azerbaijan-the country chairing the Council of Europe.