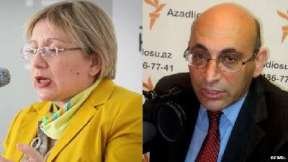 Arrested within days of each other in late July and early August, Leyla Yunus and her husband, Arif Yunus, have not been allowed to talk to one another.

Leyla Yunus, one of Azerbaijan’s best-known activists and a fierce critic of the government of President Ilham Aliyev, has also reportedly been refused medical assistance despite suffering from diabetes and kidney disease.

To circumvent the communications ban, Leyla Yunus has written an open letter to her husband, reasoning that it will "somehow” reach him.

Below is a translated version:


My dearest, perhaps you’re unaware, I can bear it all: Terrible physical pain (I’m already coming down with pneumonia from the cold water), pressure from a hardened prisoner (by the way, she’s from Ganca — our Ganca has let us down again) and even visits from those jackals in the prosecutor’s office. I endure the lack of communication (I know that you are completely without communication, without a change of clothes and medicine). I am also without food and medicine. Just imagine, these jackals, these [Interior Minister Ramil] Usubovs and [prosecutor Ibrahim] Lemberanskys — they’re so base, that in these airless cells they would also leave us starving and without medicine.

But most difficult of all is that you are not nearby. For 36 years we have almost never been apart!

I can’t take being denied the right to communicate with you even through letters, so I decided to write you through these open letters. Somehow they will reach you.

You know, together we have read it all — [Aleksandr] Solzhenitsyn, Varlaam Shalamov, [Vasily] Grossman and [Vasily] Aksyonov. Together, we often discussed how spouses who had been arrested together felt. And in 1937 there were a great many of them.

We just never would have predicted that the 21st century would bring the repression of the 1930s. Yesterday I recalled the words of [Vasily] Grossman in his "Life and Fate.” He writes about the consciences of prisoners: "An awful anguish is replaced by a foolish opium — optimism …”

How accurately he spoke about optimism in the prisons of an authoritarian apparatus. And even then, Jews, in prison camps in 1942, assuredly passed each other information: "Hitler has been given an ultimatum — immediately free all of the Jews!”

And the people believed … They believed because they clung to this foolish opium — optimism.

We are both realists. "Politics is dirty work.” We are fully conscious of this. However life turns out — the hardest part is that I can’t see you. And this is our 37th year together.