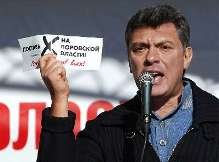 Politicians and experts in Azerbaijan strongly condemned the murder of Boris Nemtsov in Moscow last night.

The Chairman of the National Council of Democratic Forces Jamil Hasanli called Boris Nemtsov one of the most prominent Russian democrats and his murder a "terrible one."

"It hit all the democratic forces not only in Russia. More recently, Nemtsov himself said about threats and Putin's plans to kill him.

It's hard to say exactly who committed this murder. We still cannot assert unequivocally that this is the work of the Russian leadership," said Hasanli.

At the same time, to be an oppositionist in an authoritarian state means "to play with death," he added.

The head of the National Thought Center Isa Gambar called Nemtsov one of the most mature Russian politicians, recalling their meetings in the past.

On his Facebook page Gambar wrote: "This brutal assassination will strengthen the collapse of Putin's regime."

Putin’s statement that the murder was ordered and had a provocative nature, when the body was at the murder scene, looks "insincere". This is the opinion of the head of the research center East-West, Arastun Orujlu.

He drew a parallel between the murders of Nemtsov and the Azerbaijani journalist Elmar Huseynov 10 years ago. Then, too, the Azerbaijani authorities stated that the killing was ordered and had a provocative nature. This crime was never solved, reminds Orujlu.

Official Baku has not reacted to the murder.

The former Russian Deputy Prime Minister Boris Nemtsov more than once visited Azerbaijan in the early 90s. In 1997, Nemtsov and Boris Berezovsky met in Baku with the leaders of the Chechen national movement, representatives of the Maskhadov government. The result of the negotiations brokered by Heydar Aliyev was the signing of a memorandum of normalization of relations between Moscow and Grozny on security assurances to transport oil through Chechnya via the Baku-Novorossiysk pipeline.

The agreement became a reality due to the position of Nemtsov, who recognized the sovereignty rights of the Chechens.