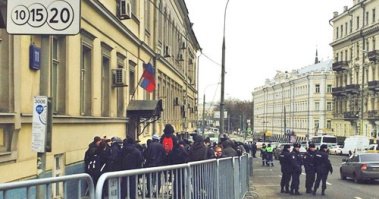 Investigators have formally charged Tamerlan Eskerkhanov and Shagid Gubashev within the case of the murder of Boris Nemtsov in Moscow. Besides, they have corrected the charges to all earlier detained and arrested persons.

The "Caucasian Knot" has reported that on February 27, opposition politician Boris Nemtsov was shot and killed in Moscow. Five persons, including Zaur Dadaev, Anzor and Shagid Gubashev, Khamzat Bakhaev and Tamerlan Eskerkhanov, were detained on suspicion of involvement in the murder.

Now, instead of the crime of greed or self-employed, the indictment contains the motive of political or religious hatred.

As suggested by investigators, Zaur Dadaev shot the politician dead, while Anzor Gubashev was driving the car that took the gunman away from the crime scene. According to the version of the Investigating Committee of the Russian Federation (ICRF), Khamzat Bakhaev, Tamerlan Eskerkhanov and Shagid Gubashev were accomplices in the murder and performed minor roles: shadowing the future victim; providing the killer with transport means, mobile phones and SIM-cards to other people's names, the "Kommersant" newspaper wrote today, referring to its own sources.

The paper adds that the changes in the indictment indicate that in the course of the inquiry employees of the ICRF have concluded that there was no customer of the murder.

Let us note here that media have disseminated the information that some close relative of a high-ranking Chechen power agent was the organizer of Boris Nemtsov's murder; however, this version was not confirmed officially. Besides, Zaur Dadaev, who had earlier served in the battalion "Sever" (North) of the Interior Troops of the Russian Ministry of Internal Affairs (MIA) in Chechnya, explained his initial confession of killing Nemtsov by being blackmailed by power agents. The remaining figurants refused to plead guilty from the very beginning.