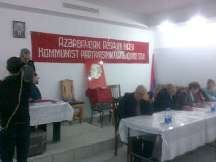 On March 1, Baku hosted the 38th Congress of the Communist Party of Azerbaijan (5th convocation.) The Congress presented 26 regional organizations of the party, sharing  the political and ideological views of the Communist Party of the Russian Federation leader Gennady Zyuganov. According to the press release,  on the results of the Congress, were heard the reports of the Central Control and Auditing Commission, the elections were held.

Chairman of the Central Committee of the CPA consisting of 31 people,   was elected Gyulnisa Mahsimova and Chairman of the Auditing Commission Adalat Yagubov.

The Congress participants  told about the difficult socio-economic situation in Azerbaijan, on the need for the communists in every way to defend social justice, social and economic rights of citizens in terms of problems of capitalist society. The need to fight for a multipolar world, against imperialist dictates and all-round rapprochement of Azerbaijan with its historical partners and allies, primarily Russia, was noted.

In this regard, support was expressed for the foreign policy of President Ilham Aliyev aimed at rapprochement and comprehensive cooperation with Russia. Congress of Communists, supporters of Zyuganov, also decided to organizational issues. Former party chairman Rauf Gurbanov and a group of his supporters were excluded from the CPA for divisive and factional activities. It was emphasized that Kurbanov and his supporters for years misled the media in Azerbaijan, as well as leadership of the Communist Party of the Russian Federation with respect to their activities and numbers, calling themselves "Communist Party of Azerbaijan."