Osce coordinator for combating trafficking is happy with situation in Azerbaycan 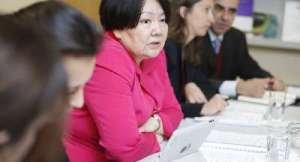 The OSCE Special Representative and Co-ordinator for Combating Trafficking in Human Beings, Ambassador Madina Jarbussynova, today praised the government for its progress in the fight against human trafficking.

Ambassador Jarbussynova was in Azerbaijan for four days to assess the country’s implementation of the anti-trafficking recommendations made in the official report issued after the OSCE’s visit in 2012.

"I would like to commend the valuable efforts undertaken by the authorities,” Jarbussynova said. "I would like to particularly highlight recent legislative amendments to improve the government’s response to trafficking in human beings.”

"In line with our Office’s 2012 recommendations, more efforts have been made to prevent labour exploitation and I encourage the authorities to continue inspections, without prior notice, of sectors at-risk, such as construction sites” Jarbussynova said. "I am pleased to report that Azerbaijan’s latest Action Plan to combat human trafficking puts more emphasis on labour exploitation.”

Jarbussynova visited shelters which provide assistance to victims of trafficking in Baku and the surrounding region. She also welcomed the opening of a new facility in Ganja, the country’s second largest city. Indeed, assistance, along with protection and non-punishment of victims, is a crucial element of any integrated efforts aiming to eliminate modern day slavery.

During the visit, Jarbussynova met Minister of Labour and Social Protection Salim Muslumov, Deputy Interior Minister  and National Co-ordinator in the Fight Against Trafficking in Human Beings Vilayat Eyvazov, Deputy Foreign Minister Mahmud Mammad-Guliyev, Chairman of the Criminal Board of the Supreme Court Shahin Yusifov and other officials. She also met with representatives of civil society and international organizations.