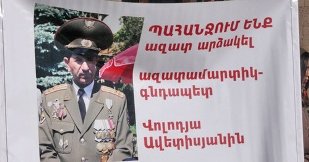 Supporters of Volodya Avetisyan, a Karabakh war veteran, an active participant of the protest actions, sentenced to six years of imprisonment on charges of fraud, have begun raising money to cover the amount that the court ordered him to pay to the state budget.

The "Caucasian Knot" has reported that Volodya Avetisyan, an active participant of protest actions, organized by Karabakh War veterans, was detained on September 20, 2013. He was accused of receiving 2000 US dollars from an employee of the Ministry of Defence (MoD) allegedly for helping to free some relative of an Armenian citizen from the mandatory military service. On July 17, 2014, the court in Armenia has found Volodya Avetisyan, a Karabakh War veteran, guilty of a fraud and sentenced him to six years in prison and a fine.

"The Compulsory Enforcement Service requires payment of the amount (2000 US dollars, note of the 'Caucasian Knot'), and in case of failure to pay, officials will use other methods: confiscation of property," the "Caucasian Knot" correspondent was told by Gagik Sarukhanyan, the Chairman of the military-patriotic organization "Khachakir". He has expressed the hope that people will support Volodya Avetisyan.

To raise funds on Facebook, activists created a group "In support of Colonel Volodya Avetisyan", and more than 700 people joined the group. According to Gagik Sarukhanyan, the money raised is expected to cover not only the amount required by the court, but also the remuneration of the advocate and filing a lawsuit to the European Court of Human Rights (ECtHR).