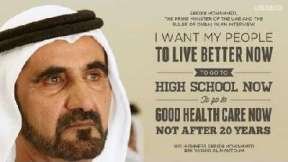 By the result of the three-day (1-3 April) official visit of the  Vice President of the United Arab Emirates (UAE), the Prime Minister and the Mayor of the city of Dubai, Sheikh Mohammed bin Rashid Al Maktoum in Azerbaijan, and by the route of movement, it was a fact-finding visit and practical. The talk is not about  two  documents signed on the  result of the visit - Memorandum on cooperation in emergency situations and securities.

The visit can be regarded as a far-reaching, as a continuation of the 5th session of the intergovernmental commission on trade and economic and technical cooperation between Azerbaijan and the United Arab Emirates, which was held  in November 2014 in Baku. According to the minutes of the meeting, the parties reached an agreement on providing the necessary support and promotion of their business communities, private and public enterprises, as well as professional organizations in order to create joint ventures in the prior sectors. At the meeting, the guests were offered the potential for investment projects, such as "White City", and agriculture.

The government of Azerbaijan, which  now faces a serious economic crisis as a result of falling oil prices, is interested in attracting investments to support current and future projects.

Dubai has repeatedly expressed its interest in investing in Azerbaijan, but the reality shows that the initiative of Dubai were not given attention. In 2010, the real estate developer of Dubai Arabtec Holding has applied for participation in the tender for the construction of a multipurpose project "Crescent" on the shores of the Caspian Sea. "Crescent" included five high-rise buildings designed for residential and commercial premises, as well as five-star hotel with 360 rooms. In 2012, Baku was opened the first in the CIS office of Dubai Chamber of Commerce. Arab investors are seriously interested in Azerbaijani sphere of tourism, trade, energy, agriculture, ICT, as well as food and banking sectors.

However, no visible presence of the Dubai capital was observed, whereas about Azerbaijani investment in Dubai and the United Arab Emirates said a lot in the press. For example, it is a multi-million dollar contribution to real estate. In 2008, a representative office in Dubai International Bank of Azerbaijan. In 2012, commissioned terminal "SOCAR AURORA Fujairah Terminal", consisting of 20 tanks, which totaled 641,000 cubic meters, will be put into operation in early 2011. He is able to take to load oil tankers more than 20 million tons of oil annually. It established a state-owned company SOCAR together with the Swiss trading house Aurora Progress.

From year to year has been an increase presence of companies with Azerbaijani capital. Over the last 4 years the number of people working in Dubai Azerbaijan doubl

Customs agreement with the Gulf countries,

A good place to live.

Mainly partnership with Emirates via the State Fund of Azerbaijan Export and Investment Promotion (AZPROMO), which still can not create similar conditions for all, without exception, and otkaztsya the principle of exclusivity in their homeland.

Parties have regular flights that provide passenger and cargo national carriers of the two countries.

The fact that not all was rosy prime minister's visit to Dubai, said a number of factors. Turnover, which grew steadily and in 2013 reached half a billion dollars in 2014 fell nine times. At the same time, statistics show that the lion's share in trade relations is imported from Dubai. Another important aspect of the bilateral relations touched Sheikh Mohammed bin Rashid Al Maktoum. In August 2014 the tax authorities of Azerbaijan conducted search operations in the Baku office of the well-known humanitarian organization "Dar al-Bir." Office staff have been charged in connection with religious communities. The organization denied the accusations, saying that acting in accordance with the legislation of Azerbaijan. Management established in 1979, "Dar Al-Bir", whose headquarters is located in the UAE by the Management Board, whose membership is approved by the Vice-President, Sheikh Mohammed bin Rashid Al Maktoum.

"Dar al-Bir" came to Azerbaijan in the early 90s of the 15 Arab charities and is one of the few remaining now for the reason that it is not engaged in missionary activities.

However, when you consider that a search for the infamous summer autumn followed by an intergovernmental meeting, and then the current Spring Summit, we can not without some skepticism, expect a "capital" emirates presence in Azerbaijan and not only in the form of charity. In the media there was information that Sheikh Mohammed bin Rashid Al Maktoum, after meeting with President Ilham Aliyev had to join their relatives who went on falconry in one of the regions of Azerbaijan. Falconry is of particular importance for the Arabs. Not by chance, these birds are depicted on the coat of arms of the United Arab Emirates, and the national denomination - AED, which, unlike the manat has not undergone devaluation.