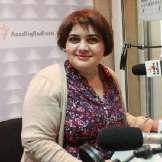 In recent years, Azerbaijan has sought recognition as a country that punches above its weight on the global scene. Its leaders, bristling at the suggestion that Azerbaijan is yet another corrupt petro-dictatorship, would like to project the image of a modern European state. Having already hosted the Eurovision song festival and other high-profile gatherings, Baku has announced plans for a series of international sports competitions, culminating, the country’s rulers hope, in the Olympics.

One victim merits special attention. Khadija Ismayilova, an accomplished investigative journalist, is currently in jail awaiting trial on charges that have rapidly grown in number and severity. She was originally arrested in December 2014 on the bizarre charge of having "influenced” a fellow journalist’s suicide attempt. Since then, the state has added charges of tax evasion, embezzlement, illegal entrepreneurship, and abuse of power.

Ismayilova has been in the regime’s crosshairs for a number of years. Through her investigations, she has zeroed in on the rampant corruption among Azerbaijan’s political elite, particularly within the family of President Ilham Aliyev.

The criminal case represents an act of desperation, as the authorities failed to bring Ismayilova to her knees through a series of earlier campaigns meant to humiliate and intimidate her, her associates, and her family. In 2012 someone secretly placed a camera in her home and then posted explicit videos on the internet. Ismayilova retained her dignity, refused to cower or apologize, and emerged from the incident with enhanced respect.

In 2013, SES, a publication associated with the ruling party, ran an article with the headline "Khadija’s Armenian Mother Should Die.” The article falsely identified several of Ismayilova’s relatives as Armenian—a label of special opprobrium given the ongoing conflict between Azerbaijan and Armenia over the disputed territory of Nagorno-Karabakh—and published the name of the neighborhood where her mother lives. It also published the address of her sister, whom it accused of working as a pimp and sex trafficker, and claimed that Khadija and her sister had appeared in pornographic movies. None of these scurrilous charges were true.

The government has made wildly contradictory statements about Ismayilova since her arrest. Spokesmen have often responded to foreign critics by insisting that she is nothing more than a suspected criminal. At other times, officials have denounced her as an instrument of American policy who has committed treason. The treason charge was put forward by Ramiz Mehdiyev, the chief of the presidential administration.

Why has the regime escalated its tactics from insults and slander to criminal prosecution? Part of the answer may stem from Ismayilova’s continued reporting on the sprawling and opaque business activities of the president’s two daughters—including their apparent links to Azercell, the country’s largest mobile telecommunications company. More broadly, the Aliyev regime has been suffering from an acute case of paranoia since former Ukrainian president Viktor Yanukovych was forced from office by the Euromaidan protest movement. The Baku authorities now accuse the West, and the United States in particular, of using civil society groups as fifth-columnists bent on toppling the regime through a color revolution.

During the Cold War, the political prisoner was often a person of international stature—think of Wałęsa, Havel, Sharansky, Bukovsky, Mandela. Pounding the table to obtain the release of prominent political prisoners was an embedded priority in superpower diplomacy. Even under super-realist Richard Nixon, the U.S. government pressed the Kremlin to release those sent to the gulag for "anti-Soviet activities,” often with success.

Today, few if any of the people jailed for working on freedom’s behalf—as a journalist, women’s rights advocate, student activist, or legal reformer—are household names, even in their own countries. But some certainly should be.

While the current reluctance of democratic governments to apply pressure over human rights issues is a global phenomenon, Azerbaijan has been especially adept at putting on
a diplomatic charade to avoid criticism from Europe and the United States. It portrays itself as willing partner in the region, a critical alternative source of energy supplies, independent from Moscow’s influence, and free of the rhetorical flak and security problems emanating from neighbors like Turkey and Iran. In return, Baku expects its record of domestic repression to be ignored, even as its conduct increasingly resembles that of Russia, Belarus, or the Central Asian dictatorships.

The United States has a special responsibility to act. Ismayilova did much of her reporting for Radio Free Europe/Radio Liberty (RFE/RL), a U.S.-funded news service, and the Aliyev regime has been quite brazen in making it a target, having raided and closed its Baku office and interrogated its journalists.

Many argue that quiet diplomacy is the most effective strategy when seeking freedom for journalists or dissidents. But at a certain point, Ismayilova’s colleagues in the international media should begin asking the U.S. government, and other foreign policy officials, pointed questions about efforts to free her. Indeed, a "Free Khadija” campaign akin to the campaign on behalf of the three Al-Jazeera journalists who were recently released from detention in Egypt would be a worthy response if closed-door diplomacy continues to come up empty.

Photo Credit: Khadija Ismayilova, in the studio at RFE/RL’s bureau in Baku.

Analyses and recommendations offered by the authors do not necessarily reflect those of Freedom House.