Afghanistan’s Minister of Oil in Baku 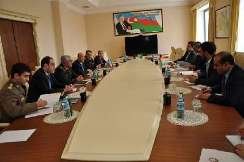 Minister of Oil and Mining Industry in Afghanistan Daud Shah Saba arrived on April 9 in Azerbaijan. On the same day he was  received by  the Minister of Emergency Situations Kamaladdin Heydarov.

According to the information  on the site of the Ministry of Emergency Situations (MES), Heydarov informed the guest about the prospects of cooperation between the relevant departments of the two countries, the usefulness of mutual visits of government leaders of Azerbaijan and Afghanistan.

In response, the Saba expressed interest in cooperation with the Ministry of Emergency Situations of the department of Azerbaijan. Further, the sides discussed issues of mutual interest.

It should be noted that Azerbaijan is one of the donor countries to assist in the training and education of employees of law enforcement agencies and diplomats in Afghanistan. In addition, Azerbaijan regularly assists in resolving social and other problems of this country in the framework of international efforts to maintain Afghanistan.

During a recent visit to Baku by the Afghan President Ghani Ahmadzai , on 1 December, 2014 was considered a wide range of issues and areas of cooperation between the two countries. In particular, while Gani met with the Minister of Energy of Azerbaijan, Natig Aliyev.