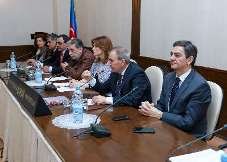 "The relations between Azerbaijan and the European Union on the eve of the Riga summit of "Eastern Partnership"- was the topic of a roundtable held on April 15 in the International Press Center by the National Council of Democratic Forces (NCDF.)

The purpose of the roundtable is  to urge official Baku to sign the association agreement with the EU, to draw public attention to the benefits of this country. The discussions are confined to the upcoming May 21-22 in Riga summit "Eastern Partnership".

The  head of the  NCDF Jamil Hasanli, the relations between Azerbaijan and the EU began to develop in 1996, when  an agreement on cooperation and partnership was signed.

Despite Azerbaijan's participation in a number of EU programs and projects,  there are not significant results in European integration. Baku avoids signing an agreement on associative relationships, preferring vague "strategic partnership."

The fall in oil prices has brought the country's economy in a critical situation.

"The situation is bad and getting worse every day. The only way is the election of a new policy,  namely European integration,"   said Hasanli.

The head of the International Commission of the National Council Gultekin Hajibeyli said that the country does not make significant steps in this direction, although it claims that seeks to Europe.

"It is connected with the corporate interests of the authorities, who do not want to give up the monopoly, do not go on the economic and political reforms. The situation with human rights is very bad," she said.

Associate membership in the EU will be the key to solving the country's problems, the key to the protection of its independence, sovereignty, territorial integrity, she believes.

However, a philosophy professor Ali Abbasov,  stated  the presence of  "Russian threat", drew attention to the experience of Ukraine. In this sense, it is important to hold the authorities "balanced policy."  According to him, the signing of the Association Agreement at the Riga summit and the end of the year, is not real.

The participants noted the need for an active work among population to promote the idea of European integration.

Without denying the factor of "Russian threat", they pointed out that European integration can be a guarantee of protection against this threat.

The PFPA leader Ali Kerimli said that the democratic forces in the country have always demanded  the European integration. Authorities do not agree with this, because they do not want to lose their "corrupt freedom",  monopoly , and electoral fraud. According to him, the country is going towards economic crisis, the resources of the Oil Fund are melting, and the banking sector on the verge of collapse.

The only way out of the situation is opening the doors to Europe, and the signing  the association agreement. "We urge the authorities to do it,"  said Kerimli. By the end of the debate a resolution was adopted.

• The basis of the relations between Azerbaijan and the EU was founded in 1996 with the signing of an agreement on partnership and cooperation. In 2004, Azerbaijan joined the European Neighborhood Policy, and in 2009 the program "Eastern Partnership".

Three members of the program - Ukraine, Georgia and Moldova have signed an Association Agreement. However, Azerbaijan offers EU purely economic cooperation without political reform, calling it a strategic cooperation.