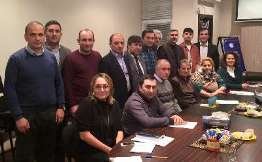 Civil Society Platform has extended an appeal in connection with the 20th anniversary of the Agreement on Partnership and Cooperation between the EU and Azerbaijan.

20 years have passed since the signing of the Agreement on Partnership and Cooperation between Azerbaijan and the European Union. The agreement provides for respect for the rule of law, democracy, human rights, as well as cooperation in the field of market reforms, free trade and other fundamental areas, strengthening the hopes of building a free society and a democratic state, the origins of which originate from the founding fathers of the Azerbaijan Democratic Republic, created in 1918.

Civil Society Platform notes with regret that despite appearing favorable conditions for the country's fundamental freedoms and human rights after gaining independence, taking the necessary steps in this direction is delayed too. The period after the signing of the Agreement was marked by serious problems in the field of free and democratic elections, respect for human rights, as well as other fundamental rights and freedoms in Azerbaijan. Persecution for political reasons and more than 90 political prisoners is a clear demonstration of the seriousness of the problems in this area.

Civil Society Platform (CSP) regrets that the authorities shy away from commitments made in the Agreement and integration into the European Union. In May 2015 the government refused to sign the Association Agreement with the European Union, as well as a strategic partnership agreement. Commitments to democratic principles and human rights is an important element of partnership between Azerbaijan and the EU, as reflected in the Helsinki Final Act, the Charter of Paris for a New Europe.

CSP is also concerned about passive surveillance by the EU of failure to fulfill its obligations by the Government of Azerbaijan. This passivity gives the impression that the European Union puts the principles of economic and energy security above human rights principles and democracy and thus kills public confidence in European integration.

CSP urges EU to pay more attention to its own well accepted fundamental values and principles, to show prompt and adequate response to the state of fundamental rights and freedoms, as reflected in the Agreement.

- To build policy with the EU on the basis of these principles by the Agreement;

- To protect and develop the indivisible and universal values - human dignity, freedom, equality and solidarity;

- To implement the principles of democracy and the rule of law;

- To ensure freedom of expression, which is the basis of any society;

- To release all political prisoners and prisoners of conscience;

- To carry out large-scale political and economic reforms;

- To sign the association agreement with the European Union as soon as possible;

- To create favorable conditions for the free activity of the civil society.